The Minnesota Vikings released the third round of teasers about their new uniforms for the 2013 season.

We're still exactly two weeks out from the Vikings officially unveiling their new uniforms for the 2013 season at their official draft party, but three new clues were released today on Vikings Uniform Insider. As you probably know by now, the Vikings are releasing exclusive clues to people that earn points via posting and hashtagging on just about every social media network you can think of.

It seems simple enough to do. But let me tell you, it's a lot of work. You have to be at 8,000 points to have all nine clues unlocked. At only 50 points per tweet and 75 points per Instagram like and/or post (maximum of 3 per day), it has been quite an effort to get there. But I'm doing it all so you don't have to! Here are the latest teasers from the Vikings about the new uniforms. (To get caught up, take a look at the post Chris and I collaborated on last week.)

The gloves you see in the headline picture are the first clue that the Vikings released today. The logo-on-the-hands look is nothing new when it comes to Nike gloves, but the coloring and pattern are definitely something I haven't seen before. With the black shoes that were posted last week, it's a bit odd to see gloves that are so heavy on the white coloring. Compare the new gloves with the older design:

I personally like the old ones better, especially with so many other aspects of the uniform pointing to go in the darker direction. But gloves are a pretty small part of the overall look so I think it's hard to get too worked up about them either way.

The next clue was a video of the longtime Vikings equipment manager giving his take on the new uniforms. Everything Ryan has to say about the new unis seems to scream "traditional" and "throwback". As Ryan explains, it sounds like the Vikings have listened to the fans' demands for the old school look. A new take on the old look? I like what I'm hearing.

I apologize again for the sound not completely syncing up with the video. It's the best my recording software could do. (If anyone has any Windows programs they could suggest that easily captures video better than this, I'm all ears. I'm currently using SnagIt. As you can see, it works, just not that well.)

The final clue of the week is a little tough to decipher. Here's the small glimpse the Vikings gave us: 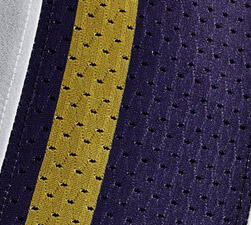 As you can see, it doesn't show much. If I had to guess, this is part of the pants stripe. If you look at this breakdown of the Rams uniforms over at SB Nation St. Louis, it matches the pattern of what they have on the pants. If the Vikings are going back to the basic pants stripe, I'm all for it. Their current pants were too busy in my opinion--the tapered stripe that was supposed to resemble a Vikings horn never really looked like a Vikings horn.

That concludes the official updates from the team, but I'd like to pass along two other pictures I received today. The first is a picture of the updated belt line for the uniform:

Nothing too exciting here, but it does correspond with the coloring of the possible pants stripe pictured above. Again, I'm not 100% sure this is accurate, but it seems to mesh with the other updates we've received.

UPDATE 4/11/13 11:24 AM: Turns out the belt picture is definitely legit: It's straight from the Vikings website.

The second picture is a bit more...interesting. This was tweeted to me by someone on Twitter and I have no idea where he got it, so take this with a HUGE grain of salt. But here it is: 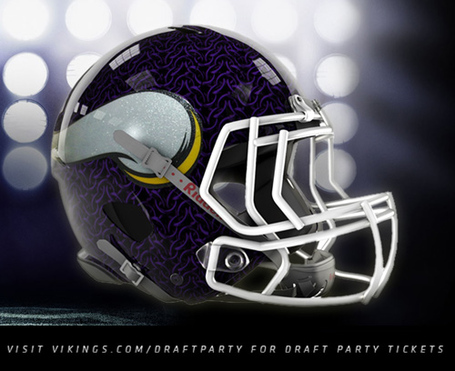 Um, yeah. I don't think that design would go over too well with most fans. The glittery horn and...whatever the hell purple pattern that is...are away too fancy for my taste. The Vikings helmet is iconic and has barely changed over the years--hopefully this is NOT what Jared Allen was talking about when he saw the new helmets a couple weeks ago.

That picture does not seem "tougher" in any sense of the word. I feel like I should reiterate this in big bold letters: the helmet picture is just something I received and is probably not what the new Vikings helmets look like. I just wanted to show it to everyone to get their reaction.

That's all for this week--be on the lookout for three new clues next Thursday followed by the actual unveiling during the draft in exactly two weeks. Follow me on Twitter for all the updates as soon as I get them. Let us know what you think about the new teasers in the comments.