The Vikings have been around for 53 years as a franchise. There has been at least one OSU player on the team for 46 of those seasons.

Share All sharing options for: Vikings Have Deep Ties With Ohio State

All of you know that I have two football passions, the Vikes and Ohio State (seriously, if my Twitter handle 'purplebuckeye' didn't give it away, I'm not sure there's much more I can do to telegraph it). I've been fortunate in that there has been at least one former Buckeye on the Vikings roster in almost every season the Vikings have played.

When Antoine Winfield left for Seattle, I was upset for a couple reasons. The obvious one is that losing Winfield really hurts the Vikings secondary, and replacing him will be next to impossible in the short term. His physical skills had diminished, but he is still pound for pound the best tackler in the game, an above average slot cover guy, and one of the leaders in the locker room.

But the second reason is because with the Vikings cutting Winfield and Michael Jenkins, there are currently no OSU guys on the roster for the first time since the end of 2003. When that happened, I got to thinking about how many players the Vikings have had that have come from Columbus, and just how deep it went.

So I did a little research to find out, and I was surprised at what I found.

The Minnesota Vikings have been in existence as an NFL franchise since 1961, with the 2013 season being their 53rd. There has been at least one former Buckeye on the roster in ever year except the seasons 1980-1984, and 2002-03, and some of the greatest Vikings of all time have come from Ohio State. (And for the record, no, I don't like saying THE Ohio State University). Let's look at some prominent purple Buckeyes, and break it down by era. 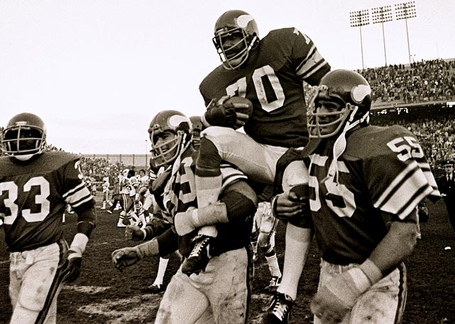 Jim Marshall, 1961-1979. Although multiple Ohio State players came and went to the Vikings, Marshall was and will always be one of the hallmark Purple Buckeyes, if not the marquee one. I feel bad for the younger generations of fans that didn't get to see the Purple People Eaters. I loved growing up and watching those guys, and Marshall was not only one of the main figures of the Purple People Eaters, he was also one of the most durable players in NFL history. Somebody please explain to me why he isn't in the Hall of Fame.

Notables: 1963 was the first year that there were three Buckeyes on the Vikings, as Bob Ferguson and Bill Jobko, joined Marshall. Jobko wouldn't make it past '63, and Ferguson hung around thru the 1965 season. 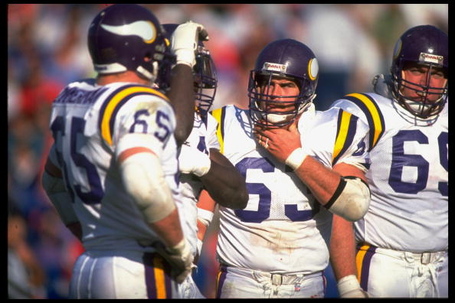 Kirk Lowdermilk, 1985-1992: Although the early part of the decade saw no former Buckeyes on the roster, Kirk Lowdermilk changed that in a big way in 1985. He was a third round draft pick in '85, and ended up a six year starter before he left for Indy via free agency after the '92 season.

Notables: Yeah, let's just call the 1980's the Great Wandering In The Tundra, as Lowdermilk was the only guy from OSU on the roster. 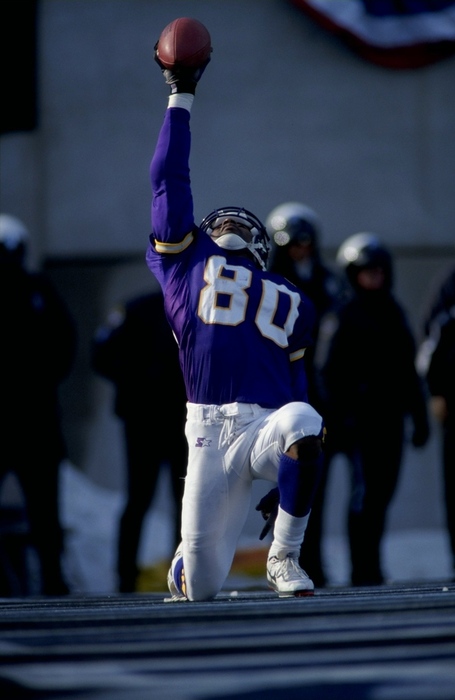 Cris Carter, 1990-2001: 1990 saw the debut of one of the greatest Purple Buckeyes in team history, for the paltry price of a $100 waiver fee. Cris Carter was picked up after being released by the Eagles, and all he did was jump start a career that would be rewarded by his recent enshrinement in the Hall of Fame. 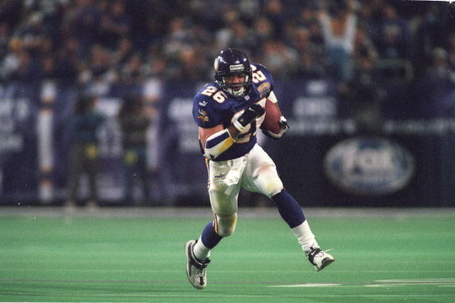 Robert Smith, 1993-2000: After a career that seemed to start and stop with injuries, Smith blossomed into one of the NFL's best runners in the late 1990's. He ran for over 1,000 yards in four straight years, and when he surprisingly retired after the 2000 season, he was the Vikings all time leading rusher with 6,818 yards.

Notables: Scotty Graham had a couple of decent seasons with the Vikings, playing with the team from '94-'96. After Robert Smith retired in 2000, Winfield Garnett joined the team and in 2001, the Vikings had two former Bucks. But after 2001, the Vikings went through two more years of no Buckeyes on the roster. 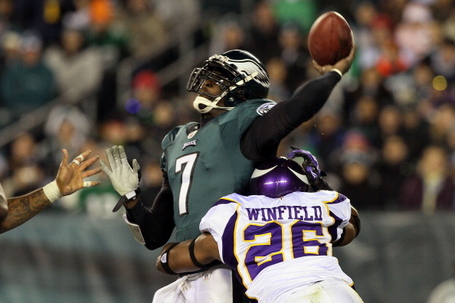 Antoine Winfield, 2004-2012. Winfield will probably go down as the best free agent signing in Vikings history. How Mike Tice convinced Winfield to come to the Vikings at the end of the Red McCombs era I'll never know, but Winfield became a mainstay on the defense and made some of the biggest plays in recent Vikings history. Pound for pound he is the best tackler in the NFL, and he will be sorely missed.

Notables: 2004 also saw 2 other former Buckeyes join the roster in DE Darrion Scott and CB Derek Ross. Scott was a starter on the 2002 OSU national championship team and was on the Vikings for three years, starting at defensive end for two of those seasons. Ross didn't make it to 2005. Mike Doss, also a member of the '02 national championship team, was an all time great Buckeye but dud NFL player, was a member of the Vikings for only one year, 2007. Most recently WR Michael Jenkins was a two year starter for the Vikes, in 2011 and 2012. Although he didn't have a catch as big as his 4th and 14 against Miami in the BCS National championship, he did have a big TD against Green Bay in the playoff clinching season finale, and also had the only TD in the playoff loss to the Packers.

So what will 2013 bring? There are several players at position of need coming out of Ohio State that the Vikings could target, like Jonathan Hankins, but until the draft is over we won't know for sure.

All we DO know for sure is that currently there are no Buckeyes currently on the Vikings roster, and that's been a rarity in Vikings history.