Are The Vikings Targeting Te'o?

Share All sharing options for: Are The Vikings Targeting Te'o?

If you've been following our Mock Draft Database over the weeks. . .and, judging from what everyone has been saying, you have. . .you know that there has been some serious momentum picking up for the "Manti Te'o to Minnesota" train. Thanks to the just back from vacation Tom Pelissero at ESPN 1500, we have a little more fuel to add to that fire.

The Minnesota Vikings sure are getting a lot of face time with Manti Te'o.

That's in addition to the formal interview the Vikings conducted with Te'o at the NFL scouting combine in February and his visit to Winter Park for the team's Top 30 event a couple weeks ago.

At this point, I'm starting to be more of the impression that it will be an upset if the Minnesota Vikings don't draft Manti Te'o. As has been pointed out several times, the Vikings have no shortage of Golden Domers on the roster, with five players that claim Notre Dame as their alma mater. Three of those five (Kyle Rudolph, Harrison Smith, and Robert Blanton) were teammates of Te'o's in South Bend. In fact, when Smith went back to South Bend over the Vikings' bye week, he crashed on Te'o's couch. If there's a situation and a locker room that could keep Te'o focused on football and not the. . .ahem. . .extracurricular activities, you would think it would be this one.

The fretting and hand-wringing over Te'o's performance at the Combine and at his Pro Day seems to have been put to rest as well, as Mel Kiper has moved the Heisman runner-up to #17 on his Big Board. (Link is an ESPN In$ider link.) Here's what Kiper has to say about him.

Answered the speed question he needed to at his pro day, and first round now seems like a lock. Instincts are very good. Attacks the backfield and was able to get to the edges. Lighter than initially listed and slower than hoped. Say what you want, but the tape doesn't lie, and teams feel they're drafting a guy who helps in Week 1.

The more I think about it, the more I wouldn't have an issue with this. After all, a guy doesn't get to be the Heisman runner-up, particularly on the defensive side of the ball, without a pretty solid resume. Yes, he had a bad game against Alabama, and sure there was all the things leading up to that, but seriously. . .the Crimson Tide averaged 227.5 rushing yards a game. What linebacker looked good against them? (And he didn't get an overabundance of help from the rest of the Notre Dame defense that evening, either.)

I don't fret over Te'o's workouts and things of that nature for the same reason I didn't flip out over Keenan Allen's "slow" 40-yard dash time from a few days ago. Workouts don't mean a whole heck of a lot. The bigger question is "Can dude play football?" Both Te'o and Allen have shown on tape that, yes, dude can indeed play football. 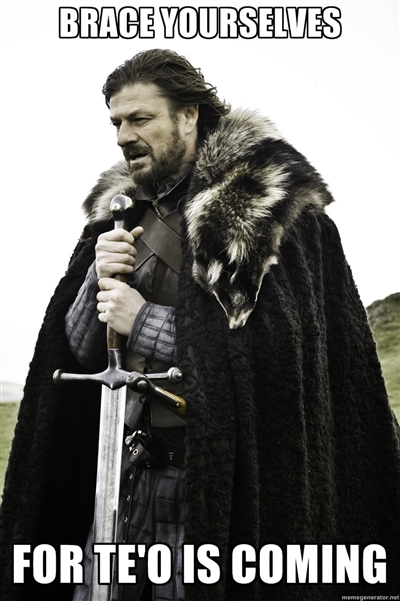