Have The Vikings New Uniforms Been Leaked?

Christian Ponder and Samantha (Steele) Ponder had their formal wedding ceremony and reception. Were the new Vikings uniforms inadvertently leaked at the reception?

Share All sharing options for: Have The Vikings New Uniforms Been Leaked?

And they are what you would expect--a young couple in love having a crazy good time at their wedding and reception. But there's also a very interesting picture that looks to be a celebration of what the Ponder's do for a living. It looks like an ESPN microphone and a Vikings jersey and helmet set up on a table for display.

Normally it wouldn't be a big deal. But with the Vikings getting new uniforms this year, this picture is sure to raise some eyebrows: 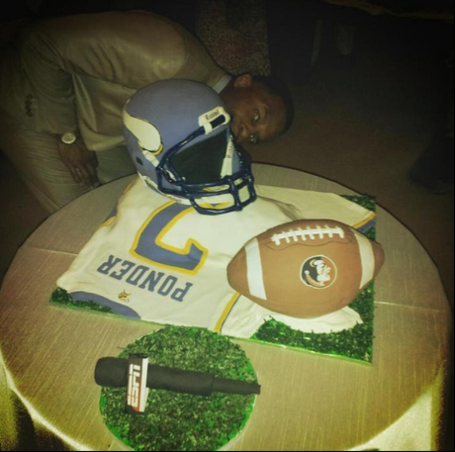 And by raise some eyebrows I'm not talking about dude doing the epic photobomb in the background, I'm talking about the helmet and jersey. Now, I find it hard to believe that Nike would allow the new uniforms to be put on display at an event like this, where pics would almost be sure to be taken and released. And when you really look at the picture, you can talk yourself into believing it's some kind of elaborate paper mache table decoration or cake, even. I mean, look at the FSU football. It looks like a football shaped cake.

But then again, if you look at some of the Vikings uniform clues we've seen...you could buy that this is, in fact, the new style helmet and road jersey. What say you, DN faithful? Real deal, or fake?

But whether it is or isn't an authentic soon to be released jersey, it looked like the Ponders and their guests had a great time. Once again, congratulations to Mr. and Mrs. Christian Ponder. Best of luck to you.