The Minnesota Vikings have concluded their four-week rollout of uniform teasers.

My Great Minnesota Vikings Social Media Binge of 2013 is finally over. The four long weeks of arduous hashtagging and re-tweeting on Twitter, liking and commenting on Instagram, and checking into places I wasn't really at on Four Square is finally complete. But as tedious as whoring myself out on social media for a month was, providing all of the latest Vikings uniform updates to you, the faithful reader, was totally worth it.

The Vikings rolled out the final three uniform teasers on Thursday morning on VikingsUniformInsider.com, capping off their four-week campaign of rolling out an even dozen clues as to what the 2013 uniforms will look like. The picture you see in the headline wasn't part of today's clues, but it was featured on the Vikings.com site so it's definitely legit. For those of us that wanted to see more of a classic look, this numbering couldn't be better. The clean, crisp, simple numbering does away with the gold outline around the numbers that the 2012 uniforms had. The numbers look like they did on the throwback jerseys and in my opinion that's a huge step in the right direction. One interesting thing about the numbers picture is the color of purple; it seems to be a bit lighter than the rest of the uniform shots we've seen over the past few weeks. Of course that might just be lighting or photo effects, but it's worth noting.

Moving on to the other clues the Vikings revealed today, the first one (and tenth overall) doesn't show the uniform at all. It's a quote from Todd Van Horne, the Global Creative Director for Football from Nike: 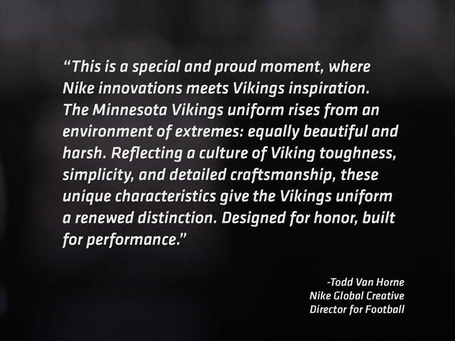 This quote is more or less just a bunch of marketing buzzwords mashed together, but it does stick with the "simplicity" theme we've seen throughout the other clues. Let's get to the actual uniform pictures.

The second clue is a lot like one of last week's clues--an extreme closeup of some sort of striping: 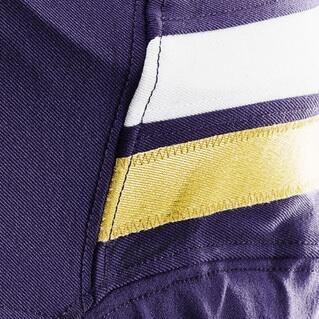 My guess is that this is probably a closeup of the new shoulder stripes. The stitching seems to be consistent with other Nike designs and the jersey coloring we've already seen in previous clues. In fact, Twitter user Jared (@TheJrad) put his PhotoShop skills to use and combined this new picture with the collar picture from two weeks ago: 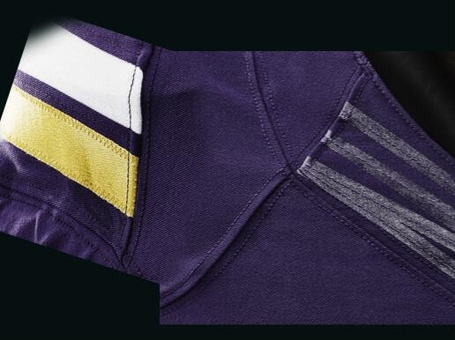 That might not be exactly how it fits together, but it looks legit to me. Thanks to Jared for passing that along. I wish the shoulder stripes went all the way around the sleeve like the old 70's jerseys did, but the way jerseys are designed these days makes that pretty much impossible. It's still a clean, simple look, which is an improvement in my book. (Assuming that I'm actually correct and the stripes are indeed part of the shoulder.)

For the final clue, the Vikings saved the best for last. None other than Adrian Peterson shared his thoughts about the new uniforms in a short video.

I love what I'm hearing yet again. According to AP, the simplicity of the design really makes it stand out.

And if Adrian Peterson loves it, who the hell are we to argue with him?

Overall I have to say that I'm pretty damn excited about what the new uniforms should look like. I'm sure not everyone will like every facet of the new unis, but it definitely looks and sounds like the 2013 uniforms are going to be very aesthetically pleasing. I added today's new pictures to the picture that SWFLSkol started last week and made a side-by-side summary of all the confirmed changes:

We're exactly one week away from seeing the real deal at the official Vikings Draft Party. According to Corporate Communications Director Jeff Anderson, the uniforms will be revealed about 45 minutes before the draft starts next Thursday.

Important to note even though #NFLDraft begins at 7:00 p.m. next Thurs., uniform unveiling to take place at 6:15. Doors open at 5.

It's good that the new uniforms are coming soon because Vikings CB Brandon Burton appears that he is in dire need of something to wear. I won't post his tweet here because it's kind of NSFW, but click this link if you want to see way more of Mr. Burton than you bargained for. (When will people learn that mirror pictures like that are NEVER OK to post?! Or even take in the first place?! Sheesh.)

UPDATE: Burton is claiming that he was hacked and took the original tweet down. Still doesn't excuse him from taking the picture to begin with!

If all this uniform news wasn't exciting enough, the full NFL schedule is getting released tonight at 7:00 PM CT. Stay tuned for much more later tonight!