They weren't supposed to be revealed until Thursday, but it looks like the new Vikings uniforms have been leaked.

The Vikings weren't supposed to unveil their 2013 uniforms until Thursday. As any regular reader of this site will tell you, we have diligently followed along as the team revealed four weeks worth of uniform "teasers" over at VikingsUniformInsider.com. The last three clues were released this past Thursday; we thought we'd have to wait a full week until we could see the entire uniforms in all of their splendor.

Turns out that the waiting period was two days less than we anticipated.

Paul Lukas, purveyor of Uni Watch and regular contributor to ESPN about all things uniform related, tweeted this photo on Tuesday afternoon:

If Lukas claims that something uni-related is confirmed, you can pretty much be assured that it's correct. This picture is a close-up of the unveiling that included the new uniforms for the Miami Dolphins and Jacksonville Jaguars. 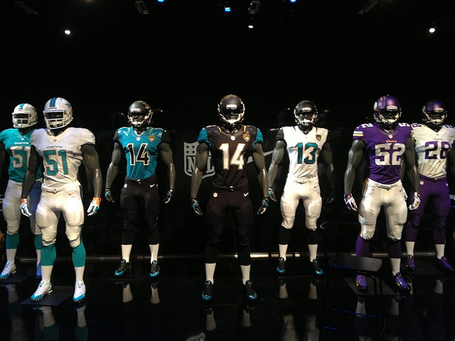 If you go through each facet of the new Vikings uniform, they match up with what we knew was coming based on the "insider" clues they've rolled out over the past month. The shoulder and pant stripes, the gloves, the wordmark on the chest, the cleats...it certainly appears to be legit. Let's take a brief look at the overall update.

Helmet: The new duller matte finish looks great. It doesn't look like they messed with the iconic horn or coloring much if at all. It's a new spin on a classic, which was the theme of the updates all along. I think a grey facemask might look better than the black, but that's nitpicking on my part.

Jersey: Most of the new jersey is exactly how we had pictured it based on the clues. The not-all-the-way-around shoulder striping, the removal of the ugly yellow collar (hooray!), the less busy look, the slightly darker shade of purple--all wins in my book. I'll admit that I'm not thrilled about the number font (cleverly called "Horn Serif" by Twitter user Josh Olson). Nike seems to think that every team needs their own numbering. But it still looks fine and doesn't take away from the overall aesthetics of the jersey.

Pants: I'm guessing that this will be the most divisive new aspect of the uniforms. Not for the design--the simple, non-truncated side striping will appeal to most fans--but the coloring. Specifically, the purple pants. Personally, I think the white pants look better with both the white and purple jerseys. But with much less gold in the uniforms, I'd still be OK if the Vikings rock the purple pants with their white road unis as shown in the picture. As long as they NEVER, EVER, EVER do the all-purple look, I don't think the Vikings can go wrong with the other combinations.

Overall, I'm thrilled with the new uniforms. They're a lot like what I had in mind after closely following the hints for the past month. The "Modern Throwbacks" look pretty darn sharp if you ask me. I'm sure we'll get a much more detailed look with lots more angles when the official unveiling happens in two days at the official Vikings Draft Party. But for now, what are your initial reactions? Let us know in the comments.