Update 4/6/13 12:20 AM: I finally got enough points to unlock the 6th Vikings uniform clue, which is also the last clue until next Thursday. This one doesn't give anything away about the new jersey--it's just a 30-second bit about how mascot Viktor Viking is getting impatient about waiting for the new uniforms (like we all are). Here's the video:

I apologize for the shoddy quality--the video capture software on my computer leaves a lot to be desired.

So that's two weeks of feverish tweeting, hashtagging, Instagramming, and checking in on every conceivable social media site, with two more weeks to go. To be honest, we haven't found out very much yet. It's starting to feel like the Little Orphan Annie decoder ring from A Christmas Story.

The Minnesota Vikings have released a couple more teasers for the new uniforms that are coming out in less than three weeks, and it looks like we're going to be getting some of the things that had been discussed in our last post about the subject.

Eric has been working to get us the latest teasers, and he put this one out on his Twitter account earlier today. They're the new Nike shoes that the team will be using in 2013. 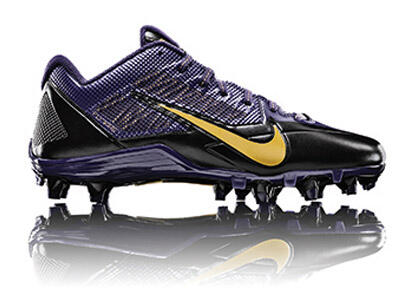 Black shoes? Hell yeah, black shoes! I really like the look of these.

But the bigger one is that, yes, it appears that the Vikings are indeed going back to a darker purple on the uniforms, if this picture that was released is any indicator.

And not only does the purple look darker, the gold actually appears that it's going to be more of a. . .well, gold. As opposed to the yellow that the team has been using in recent years.

So far, I haven't seen anything to complain about from what the team has shown us of the new team uniforms. Hopefully the next group of teasers will give us some insight into the helmets, which I'm really curious about.