The Vikings unveiled their new stadium a little while ago, and it will be one of the most impressive buildings in the world

A little while ago at the Guthrie Theater, HKS, the architects of the new Minnesota Vikings stadium, unveiled it.

To be honest, I'm not really sure what I expected, and for me, the bottom line was that the Vikes wouldn't be playing in the Metrodome.

They definitely won't be. They'll be playing in one of the most advanced, state of the art facilities in the entire world. Some highlights:

Clear is the new retractable: There is no retractable roof, but it will be made entirely of cutting edge materials and glass that will make the roof and the sides clear. There will also be five clear pivoting doors that will be the largest in the world of their kind: 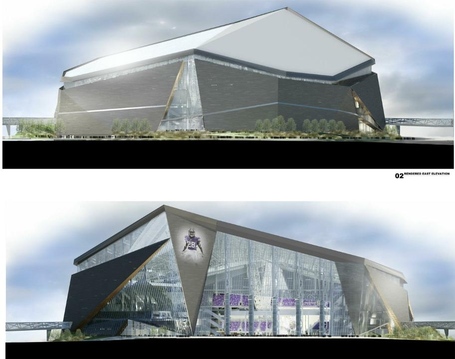 Bathrooms! EFF YEAH!: Didn't get a grand total, but there will be 'sufficent bathrooms for a crowd of this size'. That announcement brought one of the largest cheers of the evening.

Versatility: The new stadium will be the most versatile sports facility in the United States, capable of hosting Final Fours, World Cup or MLS soccer, concerts, baseball, or Super Bowls. For football, it will seat 65,000, expandable to 73,000 for the Super Bowl.

Architecturally Stunning: This is about as cutting edge as one could imagine, but I really, really like it. The innovation with the largest pivoting glass doors in the world, to the largest clear ethylene tetrafluoroethylene (ETFE) roof in the world and the first on a stadium in the nation, to the bowl that is level with the street as you walk in, to the modern lines and glass ceiling just combines well and works: 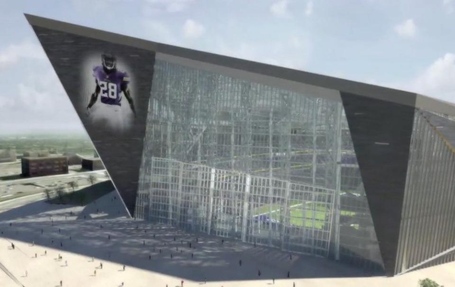 To learn more details of the stadium, click here.

It's also getting approval from some Vikings players:

That new stadium is SERIOUS!

So happy that the Viking fans will have such a great venue to watch their VIKINGS! Plus the other events that will come.

Kids, just step back for a minute and think about where we were as fans this time last year--There was no new stadium, and it looked like it might be dead, the team was coming off a 3-13 season, and our superstar running back was rehabbing from a ghastly knee injury, and we weren't sure if he would ever make it back to the form he had before the injury.

Today, we cheer for a team that has new uniforms that are a tribute to the old throwbacks, a playoff team that just loaded up on talent in the draft, who will soon be playing in the most stunning, technologically advanced stadium in the NFL when it's finished.

Enjoy the ride, folks. You've earned it, and your advocacy, passion, and love for this franchise got us to this point. Pat yourself on the back and take a bow.