Share All sharing options for: A New Little Vikings Fan

I covered the entire 2012 NFL Draft directly from Vikings headquarters at Winter Park. It was an amazing experience. Ted and I infiltrated the Sid Hartman Media Room and rubbed elbows (figuratively and literally...there wasn't much space in there) with the regular Vikings beat writers and covered all three days like bona fide media members. We had unprecedented access to press conferences for coaches and draft picks alike. Last but not least, we got all sorts of free food.

After the weekend wrapped up, I told Ted how excited I was to cover the whole thing again next year. Nothing would get in the way of me returning to Winter Park in 2013.

I didn't return to cover the draft from Winter Park in 2013. Something got in the way.

But in my defense, it was a pretty big something.

I had to bow out and let Arif cover solo on behalf of Daily Norseman this year because my wife was due with our first child on April 25. Due date and Draft Date on the same day? Not ideal. (Obviously I need to plan better next time around.) But our daughter arrived right on her due date at 1:54 PM. What did we name her?

Yes, her middle name was inspired by a certain member of the Minnesota Vikings. Yes, Gemma's mom is awesome for letting me choose that for her middle name. Yes, I got to watch the entire first round of the 2013 NFL Draft with my newborn baby girl in my arms. I was blessed enough to welcome the newest members of the Vikings--Sharrif Floyd, Xavier Rhodes, and Cordarrelle Patterson--mere hours after I welcomed the newest member of my family. 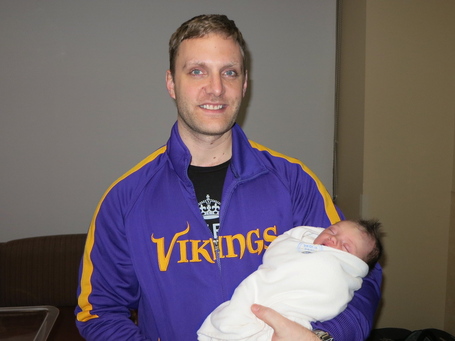 Daddy Daughter Draft Day!
After last year, I thought nothing could top my NFL draft experience.
Boy was I wrong.