Greatest Viking Of All Time Tournament: First Round Complete

Share All sharing options for: Greatest Viking Of All Time Tournament: First Round Complete

My apologies for not having anything out there since the Open Thread on Friday. Was feeling a bit under the weather and. . .well, there hasn't been a whole lot of action in Minnesota Vikings country.

As you can see, the first round of our Greatest Viking Of All Time Tournament has concluded, and we are ready for the second round starting on Monday. The bracket is right here as well. As always, you may click to embiggen. 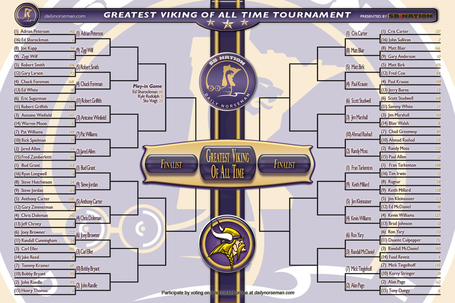 In the thirty-three first round match-ups (including the play-in game), we had just a shade over 6,000 "recs" for the various candidates. . .6,016, to be exact. Here are some of the facts and figures about the first round.

Biggest margin of victory - Moss, by 210 recs over Paul Allen

By looking at the positions that are represented in the Round of 32, you see a lot of positions that the Vikings are traditionally strong at. Here's the breakdown:

There are eight nine (oops) Hall of Famers in our Round of 32, counting Cris Carter, who will be enshrined next month. They are Alan Page, Chris Doleman, Carl Eller, Cris Carter, Bud Grant, Randall McDaniel, John Randle, Ron Yary, and Fran Tarkenton.

So, there's the latest update on our tournament, ladies and gentlemen. I might schedule the match-ups for the Round of 32 out a bit (rather than just going with random match-ups). That schedule should come out tomorrow, and we'll then have the second round match-ups starting on Monday at 8 AM Central.