Share All sharing options for: Greatest Viking Of All Time Tournament: Sweet 16 Set

We've completed the first two rounds of our Greatest Viking Of All Time Tournament, and have narrowed our official field of 66 down to the Sweet 16. At this point, as we once heard TLC so eloquently put it, there are no scrubs. (Not that there were before, necessarily, but the final 16 of this bracket is stacked.)

The bracket is above, of you can click on the picture of it below for a slightly bigger version. 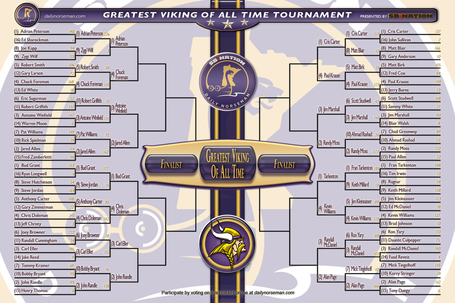 As you can see, the top 16 seeds all advanced to the third round. There were some pretty close match-ups to be had in the first couple of rounds, but I guess there's a reason that those guys were the Top 16 seeds.

Taking a look at the brackets, nine Minnesota Vikings Hall of Famers made it to the Sweet 16. A tenth, Ron Yary, was taken out in the second round by another one in Randall McDaniel.

As far as college conferences represented in our Sweet 16 go, the Big Ten (or the B1G, for the more modern crowd) has the highest representation at this point in time. That breakdown looks like this:

Here are how the next eight match-ups break down in terms of Hall of Famers. . .

So, at most, there can be five Hall of Famers in our Elite 8, as at least four will get knocked out in this round.

We're going to decrease to one match-up a day going forward, because a) now we have Training Camp to cover, and b) we want to give each match-up from here on out more focus. We'll do all the "1 vs 4" match-ups first, and then move on to the "2 vs 3" match-ups. With that, the schedule going forward will look like this:

Should be some pretty fun match-ups going forward here, folks. . .this really is where the rubber meets the road.

Be sure to tune in on Monday at 8 AM Central time when our first Sweet 16 match-up hits the board for your voting pleasure.