The Star Tribune landed an extensive interview with Adrian Peterson, and AD shares his thoughts, some surprisingly candid with Dan Wiederer. Other media summarized here as well, to kick off your week.

Share All sharing options for: Adrian Peterson Sits Down With the Star Tribune and a Media Roundup

The Star Tribune published a three-part interview with Adrian Peterson, and it has some interesting stories. Instead of posting the entire interview, I'll just quote the most interesting parts.

Part I is here. In it, he addresses a number of things, like the oft-mentioned 2500-yard goal and his awards. But interestingly, the MVP award allowed him some closure on his college days:

Q: Did hauling in that MVP trophy make up at all for that 2004 Heisman Trophy that you felt you got robbed out of?

A: Yeah. I think it can make up for that a little bit. This one's definitely bigger. And I look at that [Heisman] Trophy now and knowing that Matt Leinart has it, with how his career went, I would rather him have it. At least he has something positive to look back on and say, ‘I won the Heisman.' I feel good that he has it. Even though I know it should have been mine.

Part II is a little more interesting (here), and they talk about his injury and the lead-with-the-crown rule.

In it, Dan asks if his quick recovery had a net negative or positive social impact in regards to expectations and recovery:

Q For what you did to the timetable of ACL recovery, is that a good thing or a bad thing for the rest of the world?

A I think it's a good thing and a bad thing. Because you have a lot of guys who just don't have that same mindset, who aren't going to work as hard as I did. So when they don't come back around the time I did or a month or two after, they're looked down upon. But on the positive side, it gives people something to shoot for. I get Tweets every day from people telling me that ‘Hey, I'm going to overcome my injury or my illness. Cancer. Different diseases. I can beat it because Adrian Peterson showed me the determination and the willpower to be able to prosper and get through adversity whenever it comes.'

I really, really want to quote all of Part III (here), but Blogger Ethics™ prevents me from doing so. Star Tribune is now following the Freemium model of the New York Times, where you get a certain number of online articles for free every month without a subscription. After that, you have to pay.

Like the New York Times, this can be avoided in Chrome's Incognito mode or Firefox's privacy mode. If you are using Internet Explorer, please stop. If you are using Opera, you're clever enough to figure it out on your own. If it's some other browser like RockMelt, I don't want to hear it.

Anyway, AD decided to be fairly candid about the Harvin trade:

Q The day Percy Harvin was traded away, you let it be known on Twitter that you weren't happy at all with that. Can you explain that initial reaction?

A To me, this is how I look at it. I don't care what's going on. I am not trading Percy Harvin. If anything, if he's going to holdout, it's this. ‘You're going to sit right here and you're just not going to play. I'm not going to trade you.' That's me. That's me. So I was upset. This is a guy that you've seen what he's got. Best player I've played with. His athletic ability as a whole - fast, quick, elusive, strong as an ox. And it's all compact in a little body. To me, he was a good guy. We all have our different ways, our personalities. And sometimes they don't click with certain individuals. That's life. It happens like that. Especially in this game, you don't see eye to eye with everybody in every situation. But to me, his was a situation that went overboard and it didn't really have to go there. It could have been avoided.

Q There's an outside perception that Percy is difficult to deal with, could be a constant headache in the locker room and was hard to keep happy. But so many guys in that locker room rave that he was a good teammate and they loved playing with him. So how do you describe what it was like being around him?

A He's fiery. But he's a good guy. A good guy. He's a homebody. You'd never see him out at the club. Laid back. Chill. You could trigger him. But he's not the kind of guy where if you did one thing to him, he'd trigger. For Percy, things would have to build up. And he'd go from 0 to 100 to on you. But that takes a build-up. I'm like that too. I'm not easy to trigger. I definitely have more patience [than Percy]. But I'm like him. Once I trigger, I go 0 to 90 in a hurry. I try to control that to the best of my ability and I thank God for my patience all the time. But some guys don't have that much patience. But ultimately and overall, Percy's a good guy. He's cool. Good person, good teammate.

He also talks about Emmitt Smith's record and the 2009 NFC Championship Game. Definitely worth a click.

I might as well make this a media roundup, which I haven't done since last year.

The player who attracts the eye early in this camp, the receiver who looks as if he's being broadcast in HD while those around him wade through static, is ...

Not Greg Jennings. Jennings immediately became the Vikings' most-accomplished receiver when he left Green Bay, but he's not the most physically gifted or imposing receiver on the roster.

Nope, the first guy you notice when you watch a practice this summer is the one wearing Moss' jersey, Rice's hair and Cris Carter's physique while hinting at Harvin's versatility. In person, first-round draft pick Cordarrelle Patterson is just as fast as he looks on video, and bigger and stronger than you would have imagined.

Sure. He does look the part and is certainly electric. I haven't seen anything in camp yet, although I'm sure that's about to change. In that piece we have quotes from Frazier and Priefer, too.

1500ESPN has a bunch of things as well, with newly acquired Andrew Krammer leading the charge.

First, he talks about Joe Webb, who Priefer describes as a "freak of nature.' Greg Jennings is a fan as well and it is a decent piece. Read it here. My take is that I have to say Webb looks a lot better than I expected, so more power to him.

Then, there's the story that Frazier wants Jennings to tone it down when it comes to sniping at the Packers. Personally I love it, but it fits his style as a coach. I'll talk about team dynamics, culture and agenda setting in my next notebook. I think it is important, so the move for consistency should be praised, even if we like the individual comments.

Then we have a story about Blair Walsh, who is hoping to improve on his Pro Bowl, record-setting season. Kickers are perfectionists by nature and Priefer is one himself, so it makes sense. In particular, Priefer pointed to Jason Hanson's longevity as a reason to constantly tweak and improve. Blair Walsh seems to have the perfect mindset.

Obviously if you can get Walsh's production with Hanson's longevity, you'll take it (and pay for it, gladly).

1500ESPN also wrote about our "freakin' fifth-round punter," who provides versatility (no, really) in the way that he punts, providing directional punting and accuracy with two different punting styles if need be.

Krammer's introductory story with the radio station on training camp has to do with the array of defensive backs that are relatively unknown populating the roster.

Judd Zulgad is still employed by the outfit, incidentally. I guess he writes that Erin Henderson and Desmond Bishop are really good friends. Like, the best friends.

Back to the Star Tribune! Mark Craig tells us that the offense had a bad day. He also mentions that Everson Griffen looked explosive, and he's been getting reps from both end positions, giving Phil Loadholt a little bit of trouble.

Speaking of Loadholt, the Star Tribune published the Bill Musgrave presser, where he mentions that Loadholt "sets the tone" for the offense. There's also some stuff about Webb and Patterson.

I'm not the only one impressed by Adam Thielen. Evidently, the Pioneer Press and Bill Musgrave were impressed as well.

Scout.com has a story (almost all of their stories are subscription only) on Cordarrelle Patterson leading the charge for kick returner.

They also have a notebook that leads off with the passing game.

On the first day of camp, windy conditions were part of the reason for struggles in the passing game. On Saturday, there were plenty of other issues.

As the Vikings look to improve on their 31st-ranked passing offense from last year, many of the highlights went the defense's way.

"We just talked about turning the ball over last night as well as taking the ball away, so it's something that when we watch tape (Saturday) night, we'll talk about what we did well and what we didn't do well and try to make those corrections," head coach Leslie Frazier said. "You don't gloss over it, even if it's just the second day of training camp."

In the first session of full-team work, two of the first three passes thrown by starter Christian Ponder were batted down at the line of scrimmage by defensive linemen and another pass was caught and then fumbled.

Enter Matt Cassel, who overthrew rookie receiver Cordarralle Patterson on the quarterback's first turn and had another pass dropped by Joe Webb one play later.

A lot of stuff in it, but it's a pay site. Here's their video on the issue:

Finally, Kevin Seifert of the NFC North Blog weighed in.

First, they have a video of their own, and it's on Cordarrelle Patterson.

A well produced video. Looks like he'll be a character. At the very least, he's confident.

From Siefert, a hilarious picture to start his time at Vikings camp: 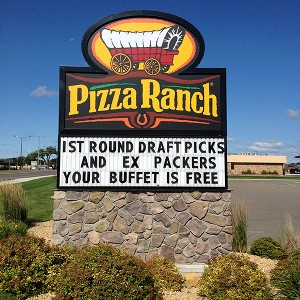 They did not clarify if it was any Ex-Packer or just Greg Jennings and Desmond Bishop. Anyway, this is one of many benefits to being a first-round pick.

We've got his notebook on the first day, which emphasizes the wind and the second day, which... doesn't. He also highlights Everson Griffen and mentions he'll have a longer article on Griffen later in the week. Because this is a retrospective, that article has already been published.

It's a great read on the maturation and growth of one of the Vikings' more immature players.

There you go! A media roundup that only has one Pioneer Press piece because their website was down when I started this off.

Hopefully we'll have some more to report by the end of the day.