There are just seven matches left at this point in our Greatest Viking Of All Time Tournament, ladies and gentlemen. We are down to just eight men in our quest to find the greatest to don the purple and gold, and seven of the top eight seeds have advanced to this point in the tournament.

The complete bracket is below. You can click to embiggen, as always. 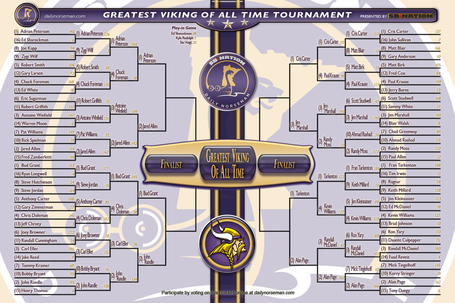 We'll do the same thing with the Elite 8 round that we did for our Sweet 16 match-ups, putting them Monday through Thursday this week. As such, the schedule will look like this:

We've got numerous positions represented here. . .and, as you'd expect from Minnesota Vikings history, the defensive line is the biggest force, with four of the eight representatives in the field. There are also seven different colleges represented, with the only one having multiple representatives being THE. . .dramatic pause. . .Ohio State University. But, much like the Highlander, there can be. . .only ONE (Buckeye in the Final Four), as Cris Carter or Jim Marshall will be sent packing in this round.

As always, the tournament match-ups will start at 8:00 AM Central and run for 24 hours.

After this week, we will be down to our Final Four. Looking at the field to this point, pretty much all of these guys could make a decent claim to this title, but only one will ultimately get it. Which one will it be? That's up to all of you folks out there to decide.

The festivities kick off again at 8:00 AM Central time, folks. Be here and be ready to cast your vote!