Share All sharing options for: Minnesota Vikings News And Links, 8/13

It's a new day, Vikings fans, and one day closer to seeing our favorite football team take the field in pre-season action once again, as the Vikings travel east to take on the Buffalo Bills on Friday night. We've got plenty of good stuff for you between now and then, though.

-We started the Elite 8 of our Greatest Viking Of All Time Tournament, bringing you a match-up between Jared Allen and Adrian Peterson. The next match-up will be up in less than an hour.

-The Vikings' coaching staff wants to remind everyone that, even though camp is coming to a close, there is still plenty of time for our favorite football team to get better.

-Arif has the most recent installment of his Training Camp Notebook available for you to check out.

-We asked you what the Vikings' strength in 2013 would be.

-Ted took a look at who's on the bubble after the first pre-season game.

-And we finally. . .and I mean finally. . .got you a full gallery of pictures from the first pre-season game of the year.

From some other places around the internet. . .

-Grantland doesn't think the Vikings are going to be very good last year. My reply? 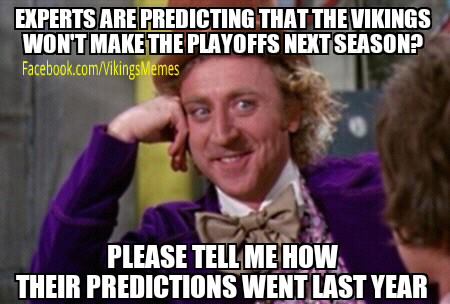 (That came from the comments of yesterday's Open Thread.)

-Adrian Peterson (who will be appearing on boxes of Wheaties here soon) welcomes HGH testing. . .as he should.

-New Vikings linebacker Desmond Bishop will see his first action in purple this Friday against the Bills.

-The bashing of quarterback Christian Ponder needs to stop. But, of course, you knew that already. I think.

-The latest installment of the profile of Vikings' running back Zach Line is available at Monday Morning Quarterback.

The rules of the Open Thread are the same as always, ladies and gentlemen. . .no politics, no religion, no feeding of the trolls, and keep the bad language to a minimum/use the spoiler tags if you feel the need to curse.

Another random song for our ambient music today.

With that, the beer light is on and the bar is open for this Tuesday, folks! The Training Camp thread will be up at 10:00 AM Central time, so keep an eye out for that and some other good stuff throughout the course of the day.