Eric offers his final views on Vikings Training Camp along with a thorough look at the defensive side of the team.

I was originally scheduled for three full days of Vikings Training Camp this week, but unfortunately real life got in the way on Tuesday. The good news is that I was still able to cover two days in Mankato and get a lot of great up-close information about our favorite team. If you missed my notes from Sunday where I went through Sunday's action and covered the offense, click here. This time around I'll be giving you my general thoughts about Monday's practices and take a closer look at the defense.

[Disclaimer: Again, if you're looking for incredibly detailed analysis of every player, play, and unit on the team, check out the amazing work that Arif has been doing for the past two weeks. I won't be upset. I honestly think we should all start a campaign for Arif to get hired as the new Star Tribune Vikings beat writer. This is just a high-level overview of what I saw. I cover the real hard-hitting stuff, like when the Vikings finally debuted their PURPLE PANTS!!] 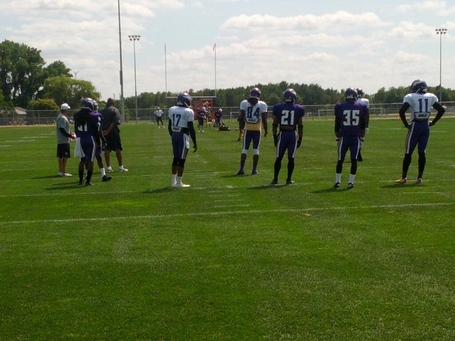 In fact, I took a whole bunch of pictures during my time in Mankato. I posted most of them on my Twitter feed but I also took a handful on my personal camera. Here's a gallery of what I haven't posted already:

OK, enough of the pretty pictures for now. Let's start with the notes.

Roll Call
Psst: knock on wood, but the Vikings have been incredibly healthy so far this year. Besides Christian Ballard and Jacob Lacey sitting out this week and Greg Childs remaining on the PUP list throughout Training Camp, there aren't really any injuries to speak of. (Well...there's one injury that could be a major concern, but we'll get to that when we talk about the linebackers.) Sharrif Floyd and Audie Cole were back as full participants after missing time on Sunday.

Deep Thoughts...by Jack Handey Eric Thompson
Here are some more random observations I had about Training Camp in no particular order:

Defensive LineI spent the most time analyzing this group out of any on the defense. And I really wish there was some way that would allow three defensive ends to play at all times from their natural positions. Jared Allen, Brian Robison, and Everson Griffen are all a cut above the rest. They are all high-end NFL starters. It's truly an embarrassment of riches at the defensive end position.

Kevin Williams isn't the biggest or quickest guy on the defensive line these days, but he doesn't need to be. There are simply no wasted movements when K-Will does what he does. Everything he does just screams "savvy veteran".

The other defensive tackle position isn't nearly as clear-cut. This was the one place on the first team depth chart where I simply couldn't agree with the Vikings coaching staff. Letroy Guion has been the nose tackle starter over Fred Evans for most of camp and to me it just doesn't make sense. Evans outperformed Guion in every facet of camp that I witnessed. There wasn't a huge chasm between the two but Evans was noticeably better. Perhaps the coaches were finally figuring that out as well: Evans was getting the first team reps towards the end of Monday's practice.

Sharrif Floyd was coming off a knee injury but you couldn't tell by the way he was moving on Monday. He looks like a natural. Floyd probably won't be a starter in Week 1 thanks to his setback but I'd bet that he'll be in the mix by the end of the season if he can stay healthy.

Former Florida State teammates and current rookies Anthony McCloud and Everett Dawkins didn't show the athletic ability of the guys we have already discussed but I thought they both had very solid technique. Not great, not terrible.

The biggest pleasant surprise out of the group has been Lawrence Jackson. He didn't really wow me during the drills but he consistently made noise in the scrimmages. There were a couple plays where he shoved Phil Loadholt back right off the snap. It looks like he has passed D'Aundre Reed on the depth chart and with good reason. Reed is still solid but it doesn't seem like he has improved at all since last year.

Marquis Jackson was rather unremarkable. Going directly after Griffen in the DE drills did him no favors. Collins Ukwu has the prototypical frame of a defensive end but not the technique. Chase Baker looks strong but his footwork is simply awful. All three look like extra bodies that will have a very tough time cracking this deep group on the Vikings.

Linebackers
This was the toughest group to assess due to injuries and the constant rotation between teams during practice. The linebackers generally looked very efficient and disciplined against the run but tended to falter and look more disorganized against the pass.

A lot of Vikings fans, myself included, assumed that Desmond Bishop would be penciled in to compete for a starting job when he arrived in Minnesota. But as Kevin Seifert pointed out on Wednesday, it shouldn't even be assumed that Bishop will make the team. Due to his injury status I didn't get to see enough of Bishop to form much of an opinion, which is exactly why we shouldn't get used to him in purple just yet.

On the other side of the spectrum, Chad Greenway and Erin Henderson are obvious locks as starters. They both played with tons of confidence and were clear leaders on the field.

Audie Cole's ankle injury reduced him to walk-thru duty for the majority of Training Camp I attended. Hopefully last year's preseason hero can replicate his performance in the coming weeks.

I was impressed with most of the second tier of linebackers. Larry Dean is a special teams ace and showed some promise when he got time with the 2's. Stanford Keglar got a late start in camp but always seemed to be around the ball. I don't think I saw him miss a tackle. Tyrone McKenzie looks a lot better than he did at this time last year. McKenzie would get my vote for "most improved" if it wasn't for Marvin Mitchell. Things have really seemed to click for the 7th-year pro the Vikings picked up in free agency last year. He was solid against the run and one of the few linebackers that consistently shut down short and intermediate routes in coverage. If he keeps it up, Mitchell could definitely end up as a starter.

Michael Mauti definitely has an advantage over fellow Penn State rookie Gerald Hodges at this point. However, I don't think Mauti is as great as some Vikings fans on Twitter will have you believe. Both rookies have a lot to learn before they make an impact.

Secondary
The defensive backfield was a busy place in Mankato--that will happen when there are 17 of them. So sue me if I didn't get detailed notes about some of the fringe guys. Darius Eubanks, Greg McCoy, Roderick Williams, and Jacob Lacey (due to injury): sorry but I just couldn't bring myself to care about you guys.

The first unit looked a lot sharper than the non-starters. Chris Cook is amazing to watch when he's on. He can shut down anyone as long as he keeps his head in it. Thankfully for Vikings fans, Cook seems more focused this year. Josh Robinson had a rather quiet couple of days while I was in attendance but that isn't necessarily a bad thing when you're a defensive back. I still like Robinson as the nickel corner more than I like him outside. Harrison Smith is still his awesome self and Jamarca Sanford seems to have put a little distance between himself and Mistral Raymond at the strong safety position.

First-round rookie Xavier Rhodes looked like...well, a first-round rookie. He moved incredibly well and had good instincts but it looked like the game was faster than he expected at times. Jarius Wright beat Rhodes pretty frequently during scrimmages thanks to Rhodes selling out and over-committing. Rhodes probably isn't ready to step in for a ton of snaps right away but I'm sure he'll learn.

A.J. Jefferson has the backup role locked down for now. He still made a couple of maddening "you really should have picked that off" plays but more often than not he puts himself into position to succeed. Brandon Burton might be giving Jefferson a run for his money. I saw Burton bat down more passes than any other DB.

Bobby Felder didn't have the ups and downs that he experienced during the first preseason game against Houston. He could have used more highs in camp to stand out in a very crowded defensive backfield. Marcus Sherels' best bet is making the team as a return specialist again--his pass coverage is pretty mediocre.

Robert Blanton, Andrew Sendejo, and Brandan Bishop all had their moments at safety but none of them stood out enough to make much of an impact in my book. Bishop is probably a step below the other two at this point simply because of his lack of experience.

If you're still with me, congratulations! You made it through my opinion of just about every player on the Vikings' 90-man roster.

As I left the practice field on Monday afternoon after a couple of quick interviews, I passed the usual gauntlet of fans loudly begging for autographs as the players walked past. I thought it got kind of annoying after just two days--I could only imagine how it was for the players after two weeks of being hounded.

I realized at that moment if I told 13-year-old me what 32-year-old me got to do, he'd lose his mind. "I'll get to interview Vikings players?! And watch them practice from like 10 feet away?! I'll write about it, and people will actually read it?! NO WAY!! AWESOME!! How much does older me have to pay to do this?! And what's a Twitter?"

That's the magic of Training Camp. It gives kids (and bloggers) from age 3 to 93 the kind of access to their favorite team that they wouldn't otherwise dream of.

A special thank you to Jeff Anderson, Jon Ekstrom, and the entire Vikings staff for giving Arif and I Training Camp access again this year. Even though we're sort of "pretend" journalists (OK at least I am--Arif's pretty damn legit), we never feel like it when we're in Mankato.