We are officially into the final week of our Greatest Viking Of All Time Tournament, folks! It has been pretty huge for us thus far, and we hope that you've all enjoyed it. If you thought there were some tough debates leading up to this point, the Final Four is going to really be something.

As usual, the updated bracket is below. You can click to embiggen for more detail. 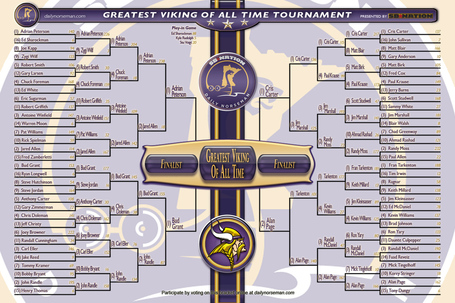 The remaining four match-ups of the tournament are going to happen this week. Here's what we've got on the docket.

As usual, the match-ups each day will start at 8 AM Central and run for 24 hours.

Thanks again to everyone that has participated in this tournament thus far. . .it's been quite interesting to this point and, as I said in the first part of the post, the Final Four should present some pretty interesting debate.

We kick off again at 8 AM Monday morning, everyone!