The Vikings fall to 0-3 after a sloppy and uninspired 34-14 loss in their last game at Candlestick Park. Let's look at the good, the bad, and the ugly.

So we get to week three of the pre-season, and the Vikings offense just doesn't look good so far. There were a few plays, and a good drive to start the third quarter, but...yeah. Based on my Twitter feed and the open threads, Christian Ponder is going to be the centerpiece of emotion for Vikings fans this year. There are some fans that are ready to toss him overboard, some who don't want to blame him for anything, and some who feel like me, I think.

How do I feel, exactly? Well, I'm a bit concerned. Yes, of course I would like to see him play better, but until he plays like this in the regular season, I'm not going to get too worked up about it. His play is unsettling, though, and he's doing some things that bother me,but to set my hair on fire and demand a new QB or a change to Matt Cassel or MacLeod Bethel-Thompson is just ridiculous at this point.

We'll talk about Ponder's night in a bit, but yeah, wading through our latest quarterback controversy is going to be an emotional roller coaster this year, isn't it?

Talk about things and nobody cares
Wearing other things that nobody wears
Ya callin' my name, but I gotta make it clear
Can't say baby where I'm gonna be in a year.

Your 'get up and go must have got up and went' SMR follows.

No one. I mean, I can't even make a remote case for anyone. There wasn't anyone who stood out to me to the point they were a blue chip stock. Some guys had nice individual plays, like Chad Greenway's pick, but man, this game was brutal to watch. Sorry kids, no blue chippers tonight.

Desmond Bishop, LB: Bishop struggled a bit in the second half, but I thought he played a good game overall, especially against SF's first unit. He moved laterally very well, cutting off the perimeter and not allowing 49er backs to turn the corner...until he tried to make the tackle, as he whiffed on one or two. But overall, it was a respectable showing for Bishop, and I think whatever doubts fans might have had about him making the roster were eliminated tonight.

Christian Ponder, QB: Sorry, but Ponder didn't look good to me tonight. If you look at his stat line you see 19/23, 116 yards, 2 TD's and a pick. But if you watch the game, Ponder rarely threw the ball downfield, was content with a one or two yard dump off, and looked ready to bail in the pocket on every throw. I just...I don't know. Look, I like Ponder, and I think he can be a good quarterback. But it's time to step up and play with confidence. It seems that Ponder is playing not to lose, as opposed to playing to win. Pre-season is what it is, and if this were the regular season, I'd be a lot more concerned.

I know a lot of people aren't happy with Ponder, but I'm going to wait until the regular season is underway before I pass my final judgement. That said, I'm really disappointed with the first team offense this pre-season, and I was expecting more, and this junk bond rating is based as much on the whole pre-season as opposed to this one game. But again...PRE-SEASON. Let's not all lose our minds yet and see how the regular season unfolds.

Josh Robinson, CB: Robinson got abused like a Michael Vick dog against the 49ers. He was picked on mercilessly, and he had no answer, giving up play after play, including a touchdown pass in the first quarter. And surprise, surprise, but Chris Cook left in the second quarter because of an injury. That really leaves the Vikings secondary with a depth problem if Cook's injury is quasi-serious.

Mat Kalil, T: Kalil has looked terrible in 2013 so far, and far and away has been the most disappointing player on offense. He is having problems with both inside and outside moves, and seriously, if he was a fringe guy fighting for a roster spot, he would be among the first 15 cut based just on his play. I don't know if he's injured or if there's something else going on, but Kalil looks nothing like the dominating LT he was last year.

Buy: The short TD passes to Zach Line and Joe Webb. Those were good throws by Ponder, and good plays by the Vikings down on the goal line. Line has made a play every game so far, and I wonder if the Vikings aren't going to try and find a spot on the roster for him. As for Webb, last week I thought he was behind Stephen Burton, but after that TD catch and Burton's terrible route running that lead to an interception...again, I don't know. Webb looked like a legitimate red zone threat over Burton, and that's something that can't be discounted. And Burton? Three pedestrian catches for 31 yards, and he stopped on a route on the Ponder pick.

Sell: All the other one and two yard passes. The Vikings went deep on the first play of the game, as Ponder missed Greg Jennings by a little bit. After that, Ponder's completions in the first half went for 0, 2, 5, 18,17,11, 4, 10, 0, and 1 yard. One of the double digit catches, to Jennings for 17, was high and wide, and Jennings went up and got it. Again, I'll give a lot of leeway here, as it's pre-season and all that. But still, for a guy that needs to answer a lot of questions about his ability to lead the team, he's not only NOT doing that, he's actually giving his critics more questions. All he needs is a good couple of games out of the chute, and he'll shut most everyone up.

Buy: Adrian Peterson playing in the pre-season. I had no problem with Peterson knocking off the rust in the third game. I thought it would be nice to see the Vikings first team offense at full strength.

Buy: The Vikings needing to find a replacement for Marcus Sherels. I think we are all in almost universal agreement that Marcus Sherels is The Little Engine That Could, and was a great story a couple years ago, but has really become a liability as the dime back. With Sherels not playing due to the death of his father, it was an opening for someone to step up and try to earn a roster spot.

Sell: Bobby Felder as the replacement for Marcus Sherels. Sorry, Felder is as much of a liability as Sherels is. I would argue even more so at this point. Sherels has issues taking on the top guys in an opponent's offense, and tonight, Felder couldn't cover guys that are going to be unemployed in a week. Also, according to my father, "that silly looking son of a bitch needs a haircut." Yeah, yeah he does.

Buy: This is the NFL. Injuries happen. Even with all the things the NFL has done to make the game safer, guys still get hurt. Big men moving very fast at one another, and colliding with the force of a car crash means guys are going to get hurt, even in the pre-season.

Sell: That cheap shot by Joe Looney on Kevin Williams. Seriously, dude? You take out Williams' knee on a low blow cheap shot when Williams was nowhere near the play? I hope you get violent diarrhea. For a month. And have to throw up the same time that you're on the toilet, and you have a Sophie's Choice in terms of the mess you'll be forced to clean up. That was a dick move, man, and I hope you get cut over it.

Buy: Mike Mauti. Mauti made two more big tackles down on the goal line again tonight, and just seems to have a nose for the ball. I really like what he's done when given the chance so far. Yes, he went low and the runner went high on 4th and goal, but he had two stops and he absolutely stuffed the runner on 2nd and 3rd down.

Sell: Audie Cole. Mauti's two tackles on the goal line came with the second team defense, which was symbolic to me. With Mauti getting work with the second team, it would appear that he has at least drawn even with Cole. And if that's the case, Cole could be in trouble. Mauti plays with a lot more instinct than Cole, and you can see him growing into the role, but with Cole you get the feeling he's hit his ceiling already.

So we head into the pre-season finale on Friday, and I can't wait. We over analyze the pre-season EVERY...SINGLE...YEAR, and I have done some of that myself. Fearless Leader and I were Gmail chatting earlier, and we both have this feeling that the Vikings will be fine once the regular season rolls around. We can't explain why, at least I can't, but I just think that we're spilling a lot of digital ink for no reason. So for now, anyway, we shall: 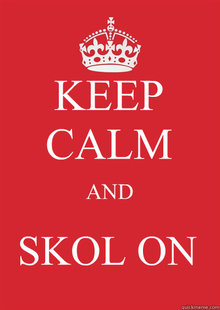 Remember, cuts to 75 by Tuesday, last pre-season game Thursday, cuts to 53 by next Monday, and then IT IS ON LIKE DONKEY KONG BECAUSE FOOTBALL IS BACK BABY WOOOOOOO!