Greatest Viking Of All Time Tournament: Updated Bracket And Schedule

Share All sharing options for: Greatest Viking Of All Time Tournament: Updated Bracket And Schedule

We're taking a couple of days off in our Greatest Viking Of All Time Tournament, and so we have an updated bracket for you thanks to our friend June Williams. As always, feel free to click to embiggen. 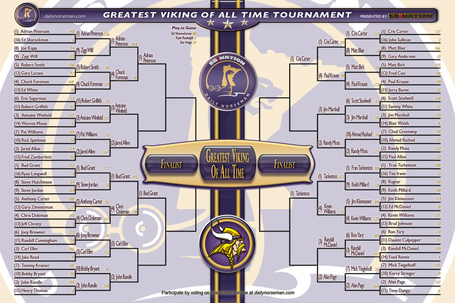 As you can see, the top four seeds all moved on, defeating the tournament's #4 seeds in the process. Now, it's time for the "2 vs 3" match-ups, and we have what promise to be some real barn-burners in those match-ups. Here's what the schedule is going to look like for those four tilts.

Honestly, folks. . .not a dull, boring match-up to be found among the lot of them, as some of the true titans of Minnesota Vikings history square off for the right to move on to the Elite 8. Four men that are in the Hall of Fame, one that really should be, and three that could easily find themselves there someday.

The Elite 8 match-ups will take place from Monday, August 12 to Thursday, August 15. I'm not entirely sure how we're going to work the Final Four and the Finals yet, but that will get worked out eventually.

Thanks to everyone that has participated in our tournament thus far!