Constantly on the bubble, Marcus Sherels has shown that he doesn't let the stress get to him, even when faced with the worst possible circumstances.

Share All sharing options for: Marcus Sherels Finds Light After a Dark Week

It was easy to begrudge Marcus Sherels, the oft-criticized nickel back, an off performance against the Buffalo Bills earlier in the preseason. It was only a day earlier that he received news that his father, Ben, had finally lost his life to cancer.

Allowing two catches on two targets for 49 yards in limited snaps, he had a night that few players on the bubble would forget.

But for Marcus, it was the least in a litany of problems he had to overcome in the coming week. Shortly after the game, he left the team to spend time with his family and prepare for the funeral, temporarily leaving the havoc of football life. But that doesn't mean his career was on hold.

Having been called out for a disastrous game against Green Bay—he was targeted ten times for nine receptions and 162 yards and muffed two punts—he knew the pressure he was under in order to make the roster once more.

That's nothing new to him.

When Marcus Sherels first signed with the Vikings as an undrafted free agent from the University of Minnesota, Sherels knew that big plays would go a long way towards getting noticed, buried as he was so low on the depth chart.

He responded in kind, with an interception in the team's third preseason game against the Seattle Seahawks.

He was cut shortly thereafter.

He signed onto the team's practice squad, but was cut again in favor of tight end John Nalbone. Nalbone didn't last long with the Vikings, and the signing of Frank Walker to the active squad (a result of an injury to Cedric Griffin) opened up space for Sherels to make the practice squad, and later the active roster when Madieu Williams found himself on injured reserve.

In 2011, Sherels fought for space on a crowded roster once more, but returned an interception for 64 yards and a touchdown, once again to the detriment of the Seattle Seahawks.

But the spectre of a poor season loomed over his head as he entered training camp, and there have been no shortage of calls by fans for his spot on the roster to be replaced. He wouldn't have it any other way.

"[It] makes me a better player, makes me get extra work in. I embrace it," he told gathered media after the game. "It's the same as it has been for the past three years."

That doesn't mean that Sherels thinks he has a particular knack for making big plays when it counts. He simply tries to grab the opportunities that come by.

"You always try to make plays when given the opportunity. Today was my chance and I took advantage of it."

The timeliness of his playmaking has certainly caught the eye of coach Frazier, however. "It seems like every year you come in and he's one of those guys that you wonder if he's going to make it this time. Who's going to push him  and take his spot on the roster. He finds a way to make plays, " he said in his post-game presser.

"He's a multidimensional guy. He can help us in a lot of areas on defense and obviously he's a very good returner so he always comes back every year in great shape, well prepared and he finds ways to make plays in the preseason and in training camp and he ends up making our ballclub."

It's pretty clear that the team pulls for Sherels, even his competition. The first player to rush onto the field from the sidelines to celebrate with Sherels was his primary obstacle to making the roster: Bobby Felder. 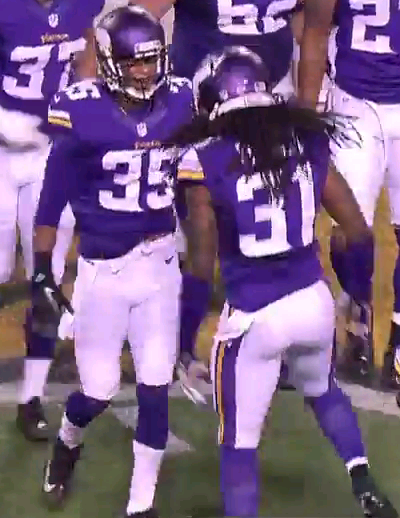 "Our whole sideline was just jubilant to see him come out and play the way he did, knowing what's on his mind and what this week has been like for him," Frazier said. "I'm really happy for him."

"Everybody loves the way Marcus competes," he continued. "We all were pulling for him. He played with a heavy heart because of his father; he went to the funeral last week and it's just been tough on him."

Despite the enormity of Sherels' loss, there was a ready support system in place. "We've got some other guys who have lost parents on our team so they know what he's been going through," Frazier said. Sherels concurred, and was quick to thank his teammates.

"It's been tough, but with my teammates and the organization and the coaches, they've all helped me tremendously. It makes it a lot easier."

Players like Everson Griffen and Joe Berger, who have each suffered similar losses in their family recently, could easily have been the players Frazier referred to. While each person handles grief differently, it's clear that the organization encourages players to support each other. A strong organizational policy when it comes to loss is a hallmark of the team.

"You try to put yourself in his shoes, knowing what he might be going through," Frazier said. "Last week, when he talked to me about going to the funeral, I wanted to be very clear to him that there was no hesitation on my part, or our organization's part, about him going to that funeral. He thought he might need to play because of the situation, but there's nothing more important than being there with your mother, your brother and your sisters at that time."

Leaving for the funeral was the best thing Sherels could have done. Aside from an impressive on-field performance, it let him get his head straight.

"It was good [to leave for the funeral]. The whole family was there and we all got together. It made us closer," Sherels said.

"[Coach Frazier] was the one that basically told me I need to be with my family, [and said] he would have done the same thing," he continued. "I am glad I made that decision."

If he expected dividends on the field, he found them. Two splash plays made him one of the impact players of the game, although he was ready to downplay them.

"It was wide open," he said of the hole he ran through on the return touchdown. "The blockers did a great job and Coach Priefer called a great return."

So, too with the interception.

"We were in two-man coverage and I was underneath, so I kind of felt the receiver bend, turned my head and [the quarterback] threw right to me."

Sherels' calm responses to the barrage of questions paralleled how he's going to approach cut day, coming August 31st. "You obviously get nervous [about cuts], but right now I'm not really too nervous. Like I said, it's out of my hands and just got to put it up on tape."

Marcus Sherels certainly did put quite a bit on tape, and he may have a sure job in the NFL, even if it isn't with the Vikings. But nothing is guaranteed in the NFL, and the Rochester native knows that. With the dark clouds of a career in limbo, the flash of brilliance he created once again in the preseason may save his spot for another year.