It's Only Brainwashing If You Allow It

Share All sharing options for: It's Only Brainwashing If You Allow It

A warning before we start. . .this post contains a picture that some people might find disturbing. It isn't necessarily graphic, but it might disturb some folks none the less. You've been warned.

By this time, we've all heard about new Minnesota Vikings wide receiver Greg Jennings going on KFAN-FM in Minneapolis after Wednesday's training camp practice and doing an interview with Paul Allen and company. The interview was a fairly lengthy one, about fifteen minutes or so. You can listen to the whole thing if you have the inclination. . .and you really should. . .at the KFAN website. (The interview starts at about the 25-minute mark of the podcast.)

Personally, I was a bit skeptical when I saw the story. I wasn't able to immediately listen to the full-length interview, but I first saw the story on Pro Football Talk and from Kevin Seifert on ESPN.com. PFT's headline is "Jennings says there's 'brainwashing' in Green Bay." Seifert's headline said "Greg Jennings: I was 'brainwashed.'" Now, to Seifert's credit, he did point out that Jennings went on to say a lot of positive things about the Packers later on in the interview. . .did I mention that the interview was about fifteen minutes long. . .while PFT did not.

To the smaller point I want to make here. . .seriously, Greg Jennings needs to shut the hell up about Green Bay already. Yeah, I get that he's going to be asked about it in every interview he does (particularly since coach Leslie Frazier has told him not to talk about it), but we get it. The Packers didn't think Jennings had anything to offer, Jennings feels he has something to offer, and the Vikings think Jennings has something to offer. That's why we are where we are now. And yes, Jennings is a smart guy, and hopefully in the future he can avoid using verbiage that immediately brings scenes from A Clockwork Orange into everyone's minds.

The larger point I want to make, however, is that of getting the whole picture on something before jumping to conclusions about it. Yes, this is something that I've probably been guilty of in the past, but I would like to think that as this blog has continued along and perspectives have matured and changed that I have been more careful about that sort of thing. We do our best to be accurate, though we're obviously slanted towards our favorite football team. After all, as has been pointed out to us ad nauseum in the past, we're not journalists. . .we're bloggers. Bloggers on a site for one particular team, no less.

This is where the picture I mentioned at the beginning starts to come into play. Again, you've been warned.

This picture has been floating around the internet for quite some time, and was part of a briefing I sat through before traveling to my current assignment. You've probably seen it at some point, too. . .it isn't terribly hard to find. 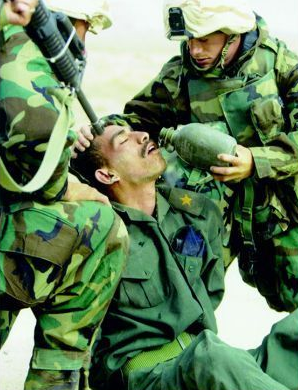 This is a picture from at least a decade ago depicting a couple of United States Armed Forces members giving aid to a foreign soldier. The service member on the right is, obviously, administering the aid in the form of water from his canteen. The one of the left is providing cover for his fellow service member while he does so.

Innocent enough picture, right? And it looks that way because you know the context behind it. However, absent of context, I can make this picture say just about anything I want. For example. . .if I crop the picture like this:

However, I can also crop the picture like this:

(Also, the picture does not make this post "open season" on the United States Armed Forces or foreign policy or anything like that. The picture was merely used to provide an example.)

This is basically what's happened with the Jennings story, fueled by the fact that we're a copy-and-paste, cut-and-crop society at the present time. Like I said, I've probably been guilty of this sort of thing in the past as well. . .and if I've done anything that falls under that heading that has offended you, then you have my apologies. (Yes, even if you're a fan of a rival team.) I'll admit that I like watching our traffic go up and seeing our site become more popular as much as anyone.

And, quite frankly, "Greg Jennings Likes It Better In Minnesota" or even "Greg Jennings Says Nice Things About Mike McCarthy" (as he did later in the interview) do not, as we say, "move the needle."

"Jennings Says There's Brainwashing In Green Bay" or "Greg Jennings: I Was 'Brainwashed'," on the other hand? Cha-ching.

Again, I fall somewhere in the middle after hearing the entire interview. Does Jennings need to stop talking about Green Bay? Yep. Did he make a bad choice of words when he said "brainwashed?" Absolutely.

Was he being overly disrespectful towards Green Bay? I don't think so. Again, he had plenty of positive things to say about his former team throughout the course of the interview (which, if I hadn't mentioned it earlier, is fifteen minutes long, not ninety seconds). He had a lot of good years in Green Bay, including winning a championship and putting up really good numbers against Minnesota on a fairly regular basis.

The point that I'm making here (and the point that Dan Weiderer of the Star-Tribune made, both at the newspaper's website and on Twitter) is that context is everything. You don't need someone else to give you your opinion on any subject. Take a minute or two, gather the facts about the situation, and form your own perspective.