Week 3 NFL Picks And Preview: The Grass Is Always Brown-er

The 0-2 starts for both the Vikings and Browns have their fans in a familiar position of loathing. With the storied histories of failure, are fans of these star-crossed franchises actually more comfortable being disappointed?

Share All sharing options for: Week 3 NFL Picks And Preview: The Grass Is Always Brown-er

All of us have that friend who's a one-upper. For everything you have or achieve, he always claims to have done it a little bit better. Say you just ran a 10K--he just finished his third marathon. Bought a new car? That's nice, but he's had the limited version for six months now. Attended a concert of your favorite band? He has already seen them like eight times, before they got popular and sold out. You just signed a rental agreement on a great new condo? He just bought a bigger house in a better neighborhood.

It's sort of like that when you compare the Minnesota Vikings to the Cleveland Browns, except in the exact opposite direction. Browns fans are the ultimate "one-downers" to every gripe a Vikings fan can come up with.

So you're still upset about the 1998 and 2009 Conference Championships? That's cute. At least we had 11 years to heal between those devastating losses. The Browns had soul-crushing defeats in the conference title game in back-to-back years. When we refer to the heartbreaks we have to name certain players--"The Gary Anderson Game" or "The Brett Favre/Bountygate Game". The Cleveland losses were so legendary that they go by simple two-word phrases: "The Drive" and "The Fumble".

Oh poor us, we made it to four Super Bowls without a single victory. AT LEAST WE MADE IT TO A SUPER BOWL, which Cleveland has never done.

Wasn't that stressful when the threat of the Vikings moving to Los Angeles loomed over us before the new stadium deal? Cleveland actually lost their franchise for four years. And since the NFL reinstated the Browns in 1999, they haven't won a single playoff game. Meanwhile, just to make things worse, the team that left Cleveland for Baltimore just won their second Super Bowl.

But man, the Vikings quarterback situation has been historically bad, right? The position has been a revolving door of past-their-prime veterans and never-had-a-prime flame outs. We have seen 15 different starting quarterbacks in the past 13 years. Now we're stuck with a third-year guy that might not have what it takes.

Did you hear that? It was every Browns fan maniacally laughing because we think we've had it bad at QB. All they have to do is present this hilariously sad picture: 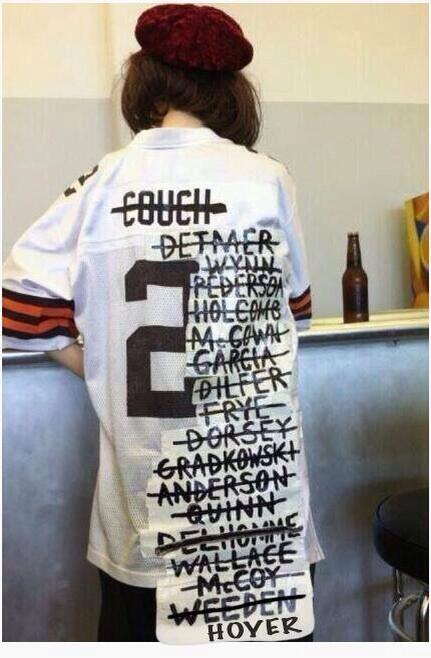 Checkmate. Plus at least our shaky young quarterback is still actually young. And playing this week. Brandon Weeden fits neither of those criteria heading into Sunday's game.

While the Browns have seemingly become a literal example of "it could be worse", I think that Cleveland fans might actually enjoy watching Sunday's game more than we will.

While the Browns have seemingly become a literal example of "it could be worse", I think that Cleveland fans might actually enjoy watching Sunday's game more than we will. The pressure's off now; nobody believes the Browns will win. Meanwhile, Vikings fans will be waiting for the other shoe to drop for three straight hours. I have already read countless tweets and Facebook posts from Vikings fans that start out with something along the lines of "If the Vikings lose this game now..." In fact, I tweeted one of them myself minutes after finding out about the Trent Richardson trade:

If the #Vikings somehow lose to the #Browns now, they should probably be relegated to the CFL.

The Vikings are supposed to beat the Browns now. If Cleveland goes up early, expect a smattering of boos in the stadium and a flurry of curse words on the Daily Norseman game threads. I truly believe that Browns fans will have an easier time watching the game because the expectations won't be there.

I read a fascinating article earlier this week from ESPN's Roger Bennett. He discusses soccer teams in his article but the message translates all too well to Vikings and Browns fans. Bennett argues that he feels much more comfortable when his favorite team (Everton) is down a goal and has to fight back rather than being up a goal and has to protect a lead. He claims that "the buzz of victory pales in comparison to the pain of failure and defeat." Hmm...I'd say that sounds familiar. I barely remember anything about the 41-21 thrashing the Vikings put on the Cardinals in the 1998 Divisional round, yet I can recall every gory detail of that fateful game against he Falcons. I have a crystal-clear recollection of watching the infamous 41-0 game but I had to look up who the Vikings beat to get there. (I'll save you the Googling: it was the Saints.)

Bennett even discussed his odd, pseudo-masochistic condition with a psychologist. Here's how the expert analyzed it:

It sounds like you take control of the experience of disappointment by preemptively becoming disappointed...You savor the anticipated loss when the team is down, a stance from which you can comfortably root for a win, without risking too much...Rather than enjoying your team being ahead, you manage the anxiety associated with them inevitably mucking up, negating the positive mood created through their lead...by spoiling it yourself. No more anxiety, just depression, and the familiar feeling of managing the weak sense of hope they might just pull this one out.

Wow. If that doesn't perfectly summarize what it means to be a Vikings or Browns fan, I don't know what does.

Regardless of the torture that each team has doled out to their respective fan bases, somebody has to win on Sunday. The Browns might be starting the power combo of Brian Hoyer and Willis McGahee lining up behind center, but it's not like the Vikings defense has really stopped anyone yet. Minnesota has already given up 65 points even with numerous miscues by the Bears and Lions. It's sort of a stoppable force versus a movable object when it comes to the Browns offense and Vikings defense.

Don't sleep on Cleveland's defense though. Most Vikings fans aren't familiar with anyone on that side of the ball save for maybe cornerback Joe Haden, but the Browns D has kept both their games close while the offense was incompetent. The Vikings need to be smart and careful on offense to put up points.

Then again, this is the Browns we're talking about. The Vikings shouldn't have to put up that many points. If they keep improving and correcting their problem areas, there's no reason to think they won't enjoy a victory in their 2013 home opener.

Of course, it's not like we're going to be able to enjoy it until the game is finished.

And now for the rest of my Week 3 NFL picks (home teams in ALL CAPS):

EAGLES over Chiefs: This game is a perfect example of why we watch football--completely overlooking the players on the field so we can blather on about the coaches.

Packers over BENGALS: It seems fitting that Green Bay finally got their first 100-yard rusher in roughly 648 games only after their starter got knocked unconscious.

COWBOYS over Rams: While I was in Chicago last weekend I got to meet three Rams bloggers who were all incredibly optimistic about their team this year. That scares me.

Lions over REDSKINS: This pick assumes that 1) Reggie Bush will play and 2) we're going to see more of Ron Jaworski making excuses for Robert Griffin III after this game is over.

TITANS over Chargers: When in doubt between two "Wait, weren't they supposed to suck?" teams, take the home squad. Is it odd that I think the team with the lead heading into the fourth quarter of this game will end up losing?

PATRIOTS over Buccaneers: The $100,000 fine on Dashon Goldson (in lieu of a suspension, just like Ndamukong Suh before him) made me think about an idea a friend mentioned to me last week. Instead of fining players a set dollar amount for dirty plays, why not fine them a certain percentage of their salaries? Wouldn't that be a fairer punishment? Suh and Goldson received the same fine but Suh makes twice the salary; therefore the fine for Suh only hurt his pocketbook half as much. If a no-namer got that fine for a similar hit, it would cost nearly half his salary. Who would be against a "10% salary" fine that increased with each subsequent violation? Anyway, the Patriots aren't great but the Bucs are an absolute dumpster fire at this point.

SAINTS over Cardinals: Andy Benoit wrote an article this week showing how Marques Colston and Larry Fitzgerald have remarkably similar stats over the past seven seasons. Yep, quarterbacks still matter.

Giants over PANTHERS: I almost picked Carolina here, but then I remembered who will be roaming the sidelines for each team. I'll take the coach with two Super Bowl rings over the guy that could very well get fired during the season if the Panthers keep losing.

RAVENS over Texans: They're putting Ray Lewis in Baltimore's Ring of Honor on Sunday. God's Linebacker will get undue credit for a Ravens win one last time.

Falcons over DOLPHINS: I'm not ready to live in a world where Ryan Tannehill is the starting quarterback of a 3-0 team.

Bills over JETS: I'm not ready to live in a world where one of these teams is 2-1, but I think Buffalo would be the slightly less apocalyptic option.

49ERS over Colts: I thought the Niners were an absolute lock until the trade this week. Now I can totally see Richardson scoring the game-clinching touchdown and Cleveland fans going completely catatonic.

SEAHAWKS over Jaguars: My Survivor Pool pick of the week (along with the rest of the world), now 2-0 after Atlanta downed St. Louis. Since I've seen smaller point spreads on Ohio State vs. Cream Puff U games, let's just get to our Gratuitous Picture of the Week. 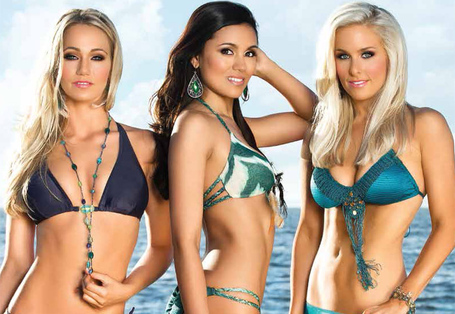 "Our bikinis show a lot of skin; thank you Jags for the easy win!" (image via prod.static.seahawks.clubs.nfl.com)

Bears over STEELERS: I can see it now: in a month Trey Wingo will send out a tweet that says "The Steelers still haven't won a game on US soil since December 30 of last year."

BRONCOS over Raiders: If you think Oakland has a chance in this game, you've obviously taken advantage of Colorado's new marijuana laws.