Another Episode of Norse Code is up and running. In this edition, we'll talk about the Cleveland Browns and some notes from around the league.

Hello all you DNers! To kick off your Thursday, we've got another episode of Norse Code ready to go. 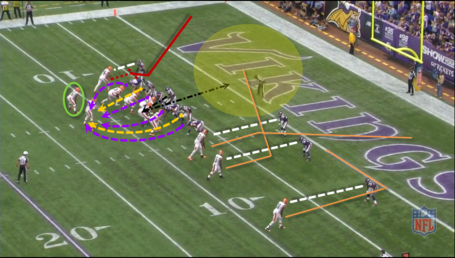 There are admittedly a lot of things I drew in that picture, so bear with me. The defense fakes sending seven and covering with four. With that are "green dog" read on the running back in case he releases into a route, and probably a "green dog" read on the tight end, too. That simply means that if the running back and/or tight end stays in protection, then the player assigned to cover him will rush the passer.

Erin Henderson doesn't look like he has a read and fakes rushing the passer in order to make sure the center isn't sliding over to block anyone before he drops into his zone. He will eventually play underneath Davone Bess, who is covered by Josh Robinson in the outside slot.

Marcus Sherels is on Josh Gordon in the inside slot, and Xavier Rhodes has man coverage on Greg Little on the outside.

Harrison Smith has man coverage on the tight end, naturally. Jordan Cameron shoots out in a poorly executed chip/fake block and then fakes a move inside before continuing with his fade route (which could have been a corner route against zone coverage).

BUT AT LEAST IT WASN'T THE COVER-2.