The One Where We Talk About Coaching Decisions

Years from now, the phrase 'coaching decision' might become as synonymous with Leslie Frazier as 'kick ass offense' is to Brad Childress.

Share All sharing options for: The One Where We Talk About Coaching Decisions

During Leslie Frazier's press conference today, he made more than one reference to player personnel packages and said they were a ‘coach's decision'.  Cordarelle Patterson only playing five offensive plays?  Coach's decision.

Frazier said Patterson is healthy and played only 5 snaps because of "coach's decision."

Desmond Bishop not playing over Marvin Mitchell?  Coach's decision.  Or, you know, luck:

Asked what he thinks he needs to get in the field, Desmond Bishop said "luck." Said its hard to explain. Feels he's proven he's healthy.

You got it, coach's decision.  I wonder if the big cat charity that Henderson promised to donate $1000 to for every sack this year  is sweating yet, because right now, it looks like he's going to get as many sacks as I will.

Or how about offensive coordinator Bill Musgrave implementing the 22 minute offense with 4 minutes left?  Pretty sure that was the coach's decision, too.

So I did a little research*, made a couple inquiries**, and tapped my ‘inside source' within the Vikings organization***, and I was able to find out how the Vikings coaching staff reaches their starting lineup.

On Thursday night, they all go to the Hooters at the Mall of America and order like 400 wings.  Some are spicy garlic, some are plain breaded...they change it up every week, because THEY ARE SO CRAFTY LIKE THAT SON AND YOU JUST DON'T KNOW WHAT'S COMING NEXT.  Except Musgrave, he gets the same thing every week, never changes.  Very predictable, very comforting.

Anyway, once they get their wings and beers, they go through what is probably the most sophisticated player personnel evaluation process in the National Football League: 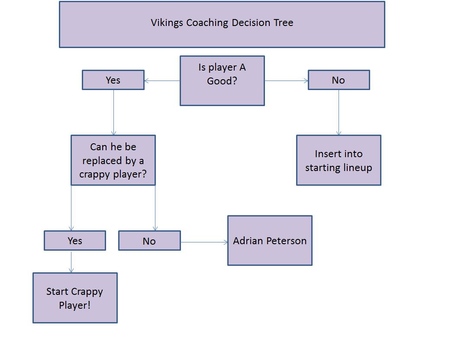 And if you think that's just something I made up at work while I was bored today I SO DID NOT****.

For reference, John Carlson had 14 snaps, Patterson five, Joe Webb four.  Marvin Mitchell had 15, Bishop, Cole, and Mauti had none.

Look, I like Leslie Frazier and the coaching staff.  But some of their personnel decisions yesterday were so mind boggling that I think they really did use this flow chart.  I get that it's only one game, but with only 16 games, each one is critically important, and this is a game the Vikings had every opportunity to win, and let slip away.  For a team that has little to no margin for error when it comes to losing the turnover battle or the time of possession battle, they need to have their best players on the field all the time, and the coaches need to put them in a position to succeed.

I am fervently hoping that didn't happen on Sunday, because if they did feel they had the best players on the field and were putting them into a position to succeed...yeah, gonna be a long year.

* I did no research.

**I made no inquiries.