One Daily Norseman writer predicts who will win the Big Game on Sunday; read on for details of a giveaway!

Share All sharing options for: Sunday Prediction And Giveaway

Before the 2013 NFL season started, I made a very bold prediction. I proclaimed that when all was said and done, the Denver Broncos would triumph over the Seattle Seahawks when the season culminated in New Jersey. Yep, I really went out on a limb there. Only me and roughly 2.3 million other people that write about football were brave enough to choose these two underdog squads to make it to football's biggest stage.

I can't blame those of you that are picking Seattle to win on Sunday. The defense has a much better historical record when it comes to "best offense vs. best defense" games. Denver's missing their best cornerback (Chris Harris) while Seattle's most dynamic receiver (Percy Harvin) is returning. (Side note: I predict that Harvin will do one of two things on Sunday: get injured again after 3 plays or contend for the MVP award. There will be no middle ground.)

This game sort of feels like the 2007 Patriots and Giants, doesn't it? On one side you a seemingly unstoppable juggernaut of an offense. On the other you have an incredibly stout defense and a quarterback that has a knack for making big plays when his team needs it the most. It's bound to be close; the Seahawks always seem to pull it out in late game situations while Peyton Manning is haunted by his failures when it matters most.

I'm still sticking with the Broncos. Sure, part of it is because I chose Denver over Seattle to start the season and I don't want to switch at the last minute. But I can't shake the feeling that the Seahawks have that certain "happy to be there" air about them, which never bodes well in the big game. The Broncos offense might not be scoring in the playoffs like they did in their record-setting regular season, but they have somehow become even more brutally efficient. Manning and the Broncos take what the defense gives them and get points out of drives more often than not. Sure, the Seahawks defense doesn't give anyone much of anything, but I think Denver will find just enough to win.

"Just enough" for Denver to win might not turn out to be that much in the end. This isn't the Denver defense you saw in the October shootout in Dallas. The Denver defense has held opponents to 17 points or less and had a positive overall rating from Pro Football Focus over their past four games, all Broncos wins.

Of course any defense usually looks better with a lead, and Denver has basically led from wire to wire since Week 16. Seattle's best chance at winning is jumping out to an early lead, grinding the clock down with Marshawn Lynch and the run, making Manning uncomfortable all day, and forcing a couple turnovers. Simple enough in theory, but nearly impossible in practice. I think Denver will have a 3-10 point lead for most of the game and Peyton Manning will prove why he's the best quarterback of our generation.

Yes, I believe that regardless of the outcome on Sunday. Manning is the best quarterback I have ever seen. But we can debate that at another time. I just hope Peyton can finally get a couple commercial deals if he wins his second title. The poor guy just doesn't get enough exposure.

And now for the fun part! We're foregoing my usual Gratuitous Picture of the Week, but it's for a very good reason. (If you need your GPotW fix, just go back to my Wild Card picks article.) Those of you that follow me on Twitter have probably noticed that I have been posting sponsored tweets with specific hashtags throughout the season. I did so because I was fortunate enough to receive a free phone with six months service, a weekend trip to Chicago for the Week 2 Bears and Vikings game, and a bunch of other goodies from my "Midwest Sports Bloggers" program. Making a few required sponsored tweets each week is a very small price to pay for all the cool stuff I got in return.

But now it's time for you to enjoy some swag from my Twitter program! The folks at Verizon have been kind enough to offer up a BIG JAMBOX by Jawbone for a giveaway! 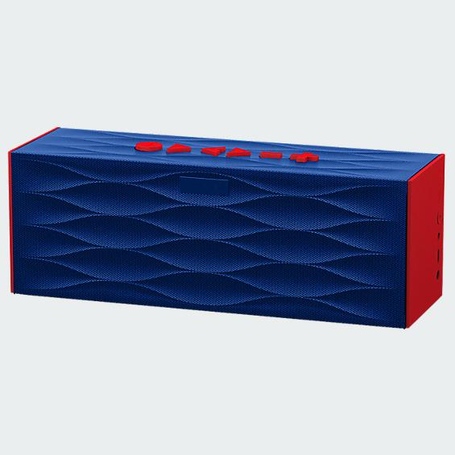 For those unfamiliar with the JAMBOX, it's a wireless speaker system that works with any Bluetooth to kick out big sound. We got a demo of the JAMBOX when we were in Chicago and this thing is pretty awesome. It can stream music from your phone, tablet, or laptop regardless of which app or service you use. As long as your device has Bluetooth, it'll work with the JAMBOX. So if you're at a party and someone wants to play Spotify or Pandora from their phone, just connect to the JAMBOX and you instantly have tunes. Or if you're watching the game and want to drown out a certain announcing team that might be on TV, the JAMBOX can supply the audio from the online station of your choosing. You can even use it as a speaker phone for calls and video chats like Skype and Facetime. The winner of the giveaway gets to choose which color they want for their JAMBOX--blue/red, green/yellow, or red/black. (Click the link to see the available color combinations and full list of features.)

Here's how you can win:

And that's about it. I'll chose the top 10-15 entries and draw the winner early next week. Good luck!