Thursday night marks a new chapter in the storied Packers/Vikings rivalry with Teddy Bridgewater's first visit to Lambeau. But could this be an entirely new book--nay, testament--about the arrival of a new franchise savior?

The Minnesota Vikings and Green Bay Packers have seemingly waged a Midwestern football holy war since the days of the Old Testament. So before previewing Thursday night's game, let us open our scripture to the Book of Border Battle, Chapter 108, Verse 1:

1 Since the days following the brief rule of Judas Favre, a great darkness had fallen upon the holy land of Minnesota. The Packergyptians, led by the Pharaoh Rodgers, had enslaved the Minnesotalites in defeat for nearly half a decade. 2  Outside of a brief uprising late in the year 2012 AD, the Packergyptians ruled over Minnesota ruthlessly, smiting anyone from the land to the West who dared to challenge the throne of the NFC North. 3 There was a battle late in the year 2013 AD where the Pharaoh Rodgers fell ill, but the Minnesotalites could only achieve a disappointing stalemate in the Pharaoh's absence.

7 Moseswater climbed Mount Eagle, the highest point in the land. He returned from the mount with ten football commandments, inscribed by the football gods onto two Microsoft tablets. 8 Moseswater shared the commandments with the Minnesotalites as a plan of action to defeat their enemies to the East.

9 The football gods then sent ten devastating plagues on the Packergyptians:

So now when I say I want to see the Vikings deliver a win of Biblical proportions on Thursday, you know what I'm talking about. (A big thanks to DN reader King VI for providing the inspiration for my ridiculous intro. I have now compared Teddy Bridgewater to Peter Gibbons from Office Space and Moses in consecutive weeks.)

But can Teddy Bridgewater, seemingly sent by the football gods to help deliver Minnesota back to relevance, really lead the Vikings to their first win at Lambeau since the Favre Revenge Game? Well, even a prophet needs some good help.

If we want to stop the Packers pharaoh, er, quarterback, the first order of business should be keeping him off the field altogether. Aaron Rodgers has absolutely torched the Vikings throughout his career--the less time he has to repeat his usual dominance, the better. The Vikings should be able to do that thanks to Green Bay's league-worst rush defense and the newfound "Poor Man's Thunder and Lightning" of Matt Asiata and Jerick McKinnon. And the Vikings shouldn't even have to get that creative either--just run it right up the vulnerable middle of the Packers defense. After all, our old buddy Letroy Guion has been getting shoved around there all season. Even when he isn't getting moved backwards like he's on ice skates, he does stuff like this:

The second line of Green Bay's defense isn't much better against the run. Jamari Lattimore has been filling in pretty well for the injured Brad Jones, but the good news for Minnesota is that it looks like Jones will be back this week. Jones had a -3.9 run defense rating from Pro Football Focus in the one game he played this year. The Vikings runners can go ahead and leave cleat marks up the front of A.J. Hawk's jersey while they're at it too. The Packers have the worst third down defense in the league because they're giving up so many yards on the ground on first and second down. The Vikings need to continue that trend and make Rodgers a spectator as much as possible.

Of course, when Rodgers does take the field, he'll be going against the second worst third down defense in the league. The Falcons and Saints went 19-for-28 on third down against the Minnesota defense the past two weeks. That's 68 freaking percent. If they're going to let Green Bay's explosive offense stay on the field two times out of three on third down, the Vikings are going to need a few of those aforementioned fictional plagues to come true to even keep the game close.

And yes, calling an offense that has barely been able to run the ball "explosive" might be overstating things a bit. If you're an Eddie Lacy owner in fantasy football (like me), you have probably noticed that Green Bay has done next to nothing on the ground. However, it is unwise to just assume the trend will continue. The Packers faced the Seahawks, the Jets, and the Lions the first three weeks of the season. All three are among the best defenses at stopping the run in 2014. (Even the Bears have been decent against the run this year.) Hopefully Lacy and James Starks continue to look pedestrian but don't be surprised if they suddenly look a lot better Thursday night.

Even if the Vikings stymie Green Bay's running, one player puts the fear of the football gods in me with this matchup: Jordy Nelson. Green Bay lines Nelson up all over the field and has him running all sorts of routes. Unfortunately for the Vikings secondary, he has been effective at just about everything this season. A quick out from the slot? No problem. A deep slant from the right side? Sure. An out-and-up route to beat the defender deep? You got it. Just look at this chart of where Nelson has caught his 33 passes through the first four games (data via PFF):

This tells us that Captain Munnerlyn, Xavier Rhodes, and Josh Robinson are going to have their work cut out for them. And that's before you throw in Randall Cobb and Davante Adams.

If Rodgers has sufficient time to get the ball to his targets, there might not even be that many third downs for the Vikings defense to worry about because Green Bay will be moving the sticks so quickly. Everson Griffen and Brian Robison haven't been bad by any means but they have been a little quieter than Vikings fans had hoped for. Linval Joseph had an amazing game in St. Louis but has barely been heard from since. With no Derek Sherrod to pick on (who was probably worse than the tight end Atlanta threw in at right tackle last week) the Vikings front four will have to get pressure on their own. Because bringing extra players against Rodgers on a consistent basis is a recipe for disaster.

From a very high-level view, it would appear that Minnesota has the advantage on both sides of the ball on the ground while Green Bay has the edge in both passing games. When everything else cancels out, look to turnovers to decide the game. The weather might be pretty sloppy at Lambeau so taking care of the ball will be at a premium. The Vikings have done an excellent job outside of the one game Matt Cassel kept on throwing to his old team. In fact, Minnesota hasn't turned the ball over at all outside of the New England debacle. A clean sheet in the turnover department would go a long way toward a second consecutive Vikings upset.

So in summary: control the clock, excel on third down, pressure the quarterback, don't turn the ball over. I just gave you the superfecta of football analysis clichés! But hey, they're clichés for a reason--they actually work.

Unfortunately I think asking a rookie quarterback with a gimpy ankle on short rest to lead a team to victory on the road over a division rival on national TV is asking a bit much, even if he is a prophet bearing news of better times to come. Especially since it might be raining, which will take away Teddy Bridgewater's superpower--his gloves. The guy has played 7 professional quarters--I think Grantland writer Jason Bailey is correct in saying we still need to temper our expectations for Bridgewater for now. I think we'll finally have a close Thursday Night game but in the end the Minnesotalites will just fall short of escaping Packergypt with a victory.

Of course if you have seen how awful my picks have been this season (I'm coming off my worst week in the history of this article), me picking Green Bay to win should probably be encouraging for the Vikings' chances.

And now for the rest of my Week 5 NFL picks (home teams in ALL CAPS):

Apparently Eli Manning is still very good against piss-poor defenses. As we saw last week, Atlanta falls into that category.

Let's see if we can keep Johnny Manziel on the sidelines for a few more weeks.

Dammit, is Dallas actually good? Since I don't want to talk about that, let's have our Gratuitous Picture of the Week instead. 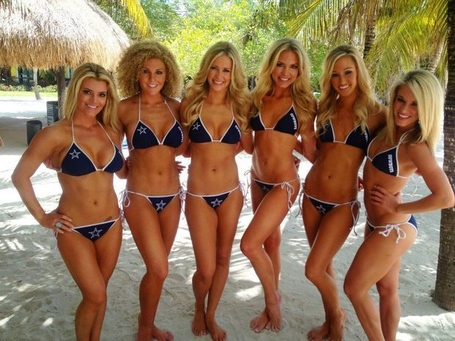 "Houston may have J.J. Watt / But their cheerleaders aren't this hot!" (image via media.dfw.com)

See, Orton? Andrew Luck has a hideous neck beard and he's tearing sh*t up. NOT A COINCIDENCE.

Who is St. Louis starting at quarterback this week? Just kidding, it doesn't matter.

My Survivor Pool pick of the week, now 4-0 after San Diego throttled Jacksonville last week. And if I bow out in Week 5 because the 'Aints go 1-4, I can deal with that.

Jacksonville has to win eventually and Pittsburgh is fresh off giving another crappy Florida team their first win of the season...but I still can't bring myself pick the Fightin' Gerharts.

I really like what Arizona is doing this season, but there's no way I'm picking Drew Stanton to beat Peyton Manning in Denver.

Worst case scenario: I get this pick wrong and we get another round of hilarious gifs featuring a giddy Andy Reid dancing around in the locker room. Combined with a copious amount of Jim Harbaugh butthurt. I'm OK with that.

I'd like New York's chances better if they were starting this Gino instead of Geno Smith:

Back to back embarrassing losses on national TV for Daniel Snyder right after South Park eviscerated him! Good times in our nation's capital.