For the second straight week the Vikings host a struggling team on an ugly losing skid. Can the Vikings finish their homestand on a positive note?

Share All sharing options for: Vikings vs. Jets Preview And Week 14 Picks: Grounded

Has there been a bigger oxymoron in recent sports naming? The name implies that this New York team can soar over its competition at incredible speeds. But these Jets can't even get off the tarmac.

The Jets are definitely not high-flying this season. In fact, they're barely capable of anything through the air. Their paltry 163.3 yards passing per game is dead last in the NFL by nearly 20 yards; the Colts average about twice that much per game. They have the worst team quarterback rating in the league (almost 50 points worse than Green Bay). They have the worst rated pass offense from Pro Football Focus. By nearly every imaginable metric, the Jets passing offense is at or near the bottom of the league.

Last week only made things worse. Geno Smith threw only 13 times, racking up a whopping 65 yards (49 net yards after sacks). This Deadspin article titled "The Jets Are Out Of Ideas" includes all sorts of nuggets about the statistical anomaly that was the Week 13 Monday Night Football game. One of my favorites was this tweet:

New York is so one-dimensional toward the run that they make the 2011-2013 Vikings look like they ran the Run and Shoot offense. The Jets are are the Tito Ortiz of football--they're one-dimensional, ground & pound, and they get sadder as time drags on.

THE JETS ARE THE TITO ORTIZ OF FOOTBALL--THEY'RE ONE-DIMENSIONAL, ALL GROUND & POUND, AND THEY GET SADDER AS TIME DRAGS ON.

That said, their one dimension is pretty formidable. Running for over 200 yards in one half when everyone in the stadium knows you're running is pretty impressive. The Jets can throw a lot of bodies at you and block very well as a team. This is the first play from scrimmage for the Jets on Monday. The Dolphins stacked 8 men in the box but the Jets were still able to gain an easy 7 yards thanks to a great initial push by center Nick Mangold and a sound second-level block by fullback John Conner. Chris Ivory didn't do anything special on the run but he didn't really need to.

New York ran out of all sorts of different sets with all sorts of different personnel. Believe it or not, when you run the ball 49 times it allows you to get a little creative now and again. They used Chris Johnson very effectively, as #CJVariableK (a nickname coined by Arif on Monday that I loved) broke the century mark in yardage for the first time as a Jet. Our old pal Percy Harvin only had one catch on the night but ran the ball six times, mostly out of the backfield. In fact, the Jets "wide receivers" had more touches and yards rushing on Monday (9 carries for 85 yards) than receiving (4 catches for 26 yards). That sort of thing happens when you're the New York Grounded Jets. But again, the Jets can still do that one thing pretty well.

New York faces a seven-man front for this run in the fourth quarter. Even though everyone in the stadium knows they were going to run since most high school 9-man teams have a more potent passing attack, they were able to gash one of the better defenses in the NFL. Left guard Oday Aboushi pulls very well and creates a huge hole for Johnson. The linebackers get swallowed up and Johnson rips off eight yards with ease.

Obviously these aren't revolutionary new blocking schemes; the Jets just execute them very well. The Vikings will have to make sure to remain very disciplined and stay in their gaps on Sunday. As Everson Griffen told Brian Hall of FSN North this week: "Farm your own land." I love that saying for this matchup: the Vikings defenders will have to dig in on their own piece of real estate and plow over everything in front of them.

Even if the Jets do actually mix it up and air it out more than a baker's dozen times at TCF, they're going to be met with resistance. Xavier Rhodes has been playing out of his mind for the past month. He won my game ball last week and it wasn't even close. Rhodes is learning that as a cover corner in Zimmer's defense you have to be as physical as possible. Zimmer said as much in his press conference after last Sunday's game and Rhodes is obviously listening. He was Kelvin Benjamin's shadow for most of the day against Carolina and the results were extremely positive.

Rhodes and this defense should be a beautiful marriage for years to come. And the best part is that it isn't just Xavier stepping up his play. My buddy Captain Obvious (no relation to Captain Munnerlyn) just told me that Minnesota's defense is a lot better than the 2013 version. The Vikings are in the top 10 for PFF ratings in overall defense, run defense, and pass coverage. Last year? They were 24th, 23rd, and 31st respectively in those categories. If that doesn't make you believe in the Power of Zimmer nothing will.

The Vikings should be able to keep New York's predictable offense in check even if players like Anthony Barr and Sharrif Floyd remain questionable at the time of this posting. The other side of the ball might prove to be a bit trickier. Rex Ryan might be dead coach walkin' but he can still coach up a defense with the best of them. The Jets defense is one of the league's best and it's not like Minnesota's offense was setting records to begin with. It probably isn't wise to depend on two special teams touchdowns every week so Teddy Bridgewater & company are going to have to find a way to manufacture a few scoring drives on their own Sunday.

I hate to sound like a broken record, but this record keeps playing the right song--this game will probably come down to turnover differential. The Vikings are now 5-1 when they don't turn the ball over this season; they're 0-6 when they do. Ball protection should be the #1 priority. If the Vikings don't give the Jets good field position, New York should have a really tough time scoring points. (Unless punter extraordinaire Jeff Locke helps them out in that department.)

Finally, I am fully aware that this is Percy Harvin's return to Minnesota. Am I the only one that doesn't really give a crap about this? Harvin is obviously one of the most talented players in the league, but his attitude resulted in him languishing on a losing team with no quarterbacks capable of getting him the ball on a regular basis. To be honest it serves him right. The Vikings obviously won that trade with Seattle based on Rhodes' recent play alone. Harvin is just another guy at this point as far as I'm concerned.

That said, I'm still frightened that Harvin will return a kick for a TD or score on an end around after making 9 guys miss, because this is still Minnesota sports we're talking about. I'm even a little afraid that Eric Decker will have a big game at his alma mater.

But I'm still confident that the Vikings will win. So confident that I'm making the Vikings my Survivor Pool pick of the week, which is now 10-3 on the season after Detroit stomped Chicago last week. (Why are all of you yelling "NOOOOOOO DON'T JINX US!" at your screens right now?)

As Chris pointed out earlier today, the Vikings have beat the Jets only once. Ever. And that one win was almost 40 years ago. I'd say it's time to update the ol' franchise résumé, wouldn't you? If not, I think we should all be grounded from watching the Vikings for the rest of the season.

And now for the rest of my Week 14 NFL picks (home teams in ALL CAPS):

Although Dallas is another December swoon away from somehow finishing 8-8 for the millionth straight time, I think the Bears will out-suck the 'Boys on Thursday.

I actually think Cincinnati should win this game. But Pittsburgh has shown us all season that you should pick against what everyone thinks will happen in their games.

I for one am thrilled to see how Tampa Bay blows this game after hanging around for most of the day. Even the Friday Night Lights writers would have rejected how the Bucs lost last week because it wasn't believable enough.

Gregg Easterbrook often writes about Hell's Sports Bar in his Tuesday Morning Quarterback columns. There's no doubt that this game is playing on all 28 flat-screen HDTVs at the bar this week.

The RGIII Bowl!* (RGIII not included.) Since the only thing riding on this game is the draft picks that both of these franchise will screw up next year, let's get to the Gratuitous Picture of the Week. 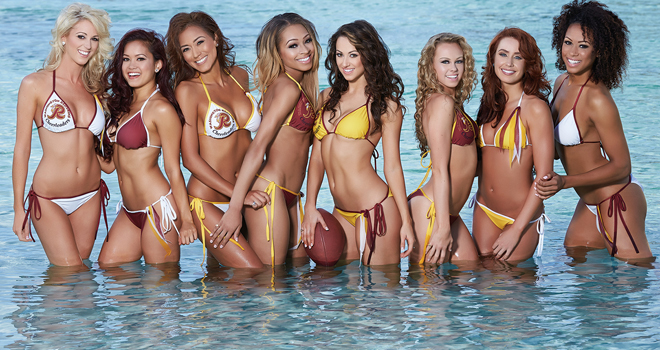 "If you're looking for fun we're easy to see / We're on the sidelines next to RGIII!" (image via redskins.com)

Much like some fantasy football leagues, the playoffs begin in Week 14 for these two teams. I can't see how the loser makes the postseason.

Hey Carolina--it might be time to sit Cam Newton for the rest of the season. Every time he gets knocked to the ground he gets up like an old man getting out of bed.

Am I the only one that started collecting non-perishable food and essential survival items when Ryan Fitzpatrick threw six touchdowns last week? I thought the apocalypse was surely upon us.

Congratulations Buffalo, you don't have to go to Toronto anymore! But you aren't going to the playoffs either.

First one to 100 yards passing wins?

Do you think the 76ers got a card from the Raiders saying "welcome to the 1 Win Club!" after beating the T-Wolves last night? I'd like to think they did. Horrible teams should stick together.

This was a tough one for me to pick. When in doubt, take the team that doesn't have Mark Sanchez.

I went back and forth on this one for quite a while too. New England is the better team but they might be in "vanilla offense cruise control to another AFC East title mode" already.

If your fantasy playoff fate is in the balance on Monday night and you're going against anyone from Green Bay, you probably shouldn't watch this game. It's gonna get ugly.