The 2013 Vikings Word Cloud Is Perfect

Reddit put together a list of the top words Vikings fans used about their team this past season, and the results are hilariously telling.

Share All sharing options for: The 2013 Vikings Word Cloud Is Perfect

Most of you are familiar with the concept of word clouds. But just in case you aren't, here's a quick definition for you:

A visual representation for text data, typically used to depict keyword metadata on websites, or to visualize free form text. Tags are usually single words, and the importance of each tag is shown with font size or color.

So basically the more times a word is mentioned in a certain context, the larger it will appear in the cloud. The people at Reddit NFL created a word cloud from their threads for each team during the 2013 season. They created a word cloud that gave the top 100, 200, and 300 words for each team as well as an overall NFL discussion thread cloud. (You can check out the entire page here.)

So in the Vikings case, the following word cloud gives the most used words in the r/minnesotavikings thread, which is a great site to check out when you're not perusing the fine pages of Daily Norseman. Let's take a look at the Top 100 words of 2013 for Minnesota Vikings fans (click here for the full size version): 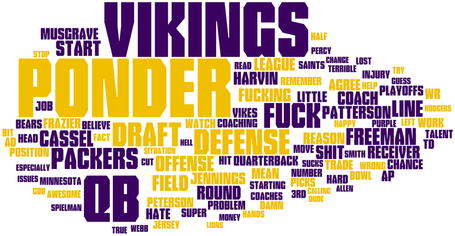 Let's take a look at some of the highlights:

I hope they do this again next year so we can compare and contrast 2014 to 2013. Early prediction: the quarterback discussion and swear words aren't going anywhere.