Alright, ladies and gentlemen, I promised this to you for this weekend, and here it is. We're rapidly approaching the NFL Scouting Combine in Indianapolis. Before we get the opportunity to watch guys run around in t-shirts and shorts and perform drills, I wanted to take a look around the interwebs to see what some of the "experts" out there are projecting for the Minnesota Vikings when it comes to this May's draft.

(Yes, I still hate that the draft is in May this year.)

For those of you that are unfamiliar with our Mock Draft Database, here's a link to last year's group as sort of a refresher. There are a lot of mock draft databases out there, but I'm pretty sure that this is the only one that's Vikings-specific. Basically, I go around looking at mock drafts, putting them into the spreadsheet that "purpledork" was kind enough to set up for me last year, and attempt to represent where the expert guessers out there think the Vikings are going to direct their attention in the upcoming draft.

Usually, there are two graphics that accompany the database. There's the "donut graph," which summarizes the selections for a particular week, and the "jell-o salad" graph, which shows how frequently or infrequently a player is matched up with the Vikings over time. This week, being the first iteration of this year's database, we will only have the "donut graph" because, well, one week does not a trend make.

We also color-code the graphs by position. In this first version, there are only two different positions that the Vikings are projected to draft at #8 overall. . .quarterbacks and linebackers. So, in this case, the quarterbacks are shown in various shades of purple, and the linebackers are shown in various shades of yellow. If more position groups become a factor, we will add them in with their own different color group.

I'm starting out small this time around, with just 25 mock drafts. This number will fluctuate and (mostly) grow throughout the process. By the time we were done with the 2013 Mock Draft Database, there were exactly 100 mock drafts that showed what the Vikings were going to do, extending out as far as three rounds. We've done that this year as well, though there aren't a whole lot of mocks at this point that go beyond one round.

So, without any further ado, here are the 25 mocks that make up version 0.5 of this year's Mock Draft Database, as well as what they have the Minnesota Vikings doing.

As I mentioned in the previous paragraphs, you can see that only two positions come off the board for the Vikings at #8 overall. You can also see that there are two players that are more dominant than the others, those being Central Florida quarterback Blake Bortles and Fresno State quarterback Derek Carr. Nine of our 25 mock drafters have Bortles coming to Minnesota, while six have them calling Carr's name instead. The other two picks among the quarterbacks, Teddy Bridgewater and Johnny Mondo Delicious Ice Cream Football Manziel, each appear once.

You'll note that one of Derek Carr's selections has a * after it. That's because there was a trade involved. In Matthew Fairburn's mock for SB Nation, he has the Vikings making a deal with the New York Jets to move from #8 overall to #18 overall, a move that nets them an extra second rounder (#49 overall) in the process. The Jets use that pick to select Texas A&M wide receiver Mike Evans, while the Vikings take Carr at #18.

Here's what the "donut graph" for this first edition of the database looks like. As always, you may click to embiggen. 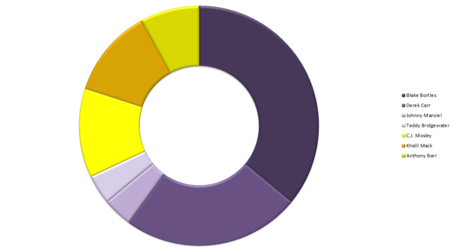 Certainly not as exciting as last year's was thus far. That will happen when you a) pick much earlier in the draft and b) have glaring, obvious needs. Still, this will likely have some fluctuation as we get closer to draft day.

So there you have it, folks. . .your pre-Combine Mock Draft Database for the Minnesota Vikings. We will effort to do this every Saturday until draft day. Enjoy!