My apologies for not getting this up yesterday, folks. . .spent a great deal of time and energy focusing on the Derek Carr hangout (which ultimately blew up for me just before it was scheduled to start), so this got delayed until today.

I have added some more Mock Drafts to the database to get us up to a total of 36 for version 1.0. Contrary to what I thought in last week's database, this week a couple of folks mocked players to the Minnesota Vikings at positions other than quarterback or linebacker, so I've had to add a couple of new colors to this week's visuals. The color chart now looks like this:

Yes, we do have a wide receiver being mocked to the Vikings at #8 overall. . .one that our own MarkSP18 will be particularly happy with, I think.

So, without any further ado, here is this week's listing of Mock Drafts:

The quarterbacks are still dominating the overall position race, with 22 of the 36 mock drafts we have charted tabbing a signal caller to Minnesota. However, the percentages have changed a little bit. In last week's installment of the database, Central Florida's Blake Bortles was named nine times. He was named nine times this week as well, but since there were only 25 mock drafts last week (compared to this week's 36), his selection percentage has dropped from 36% to 25%. Derek Carr also appears nine times, up from his six last week, moving him from 24% to 25%. Teddy Bridgewater and Johnny Manziel are each selected in 5.5% of our mock drafts.

Linebackers are still the second highest position, accounting for 12 of the 36 selections. Buffalo's Khalil Mack now leads the way in number of total votes with six, Alabama's C.J. Mosley comes in second with four, and UCLA's Anthony Barr is in third place amongst the linebackers with two votes.

Our two newcomers this week are each at positions that had not been mocked to the Vikings last week, with Missouri defensive end Kony Ealy and USC wide receiver Marqise Lee each receiving one selection in this week's database. I would have to think Ealy has a much better chance of sticking around in future versions of the database than Lee does because. . .well, a wide receiver to the Vikings at #8 seems kind of silly to me. But I'm not an expert or anything, so what do I know?

With that, here are the two charts for this week, starting with the donut graph as we always do. As always, you may click to embiggen, which is a perfectly cromulent way of seeing it more clearly. 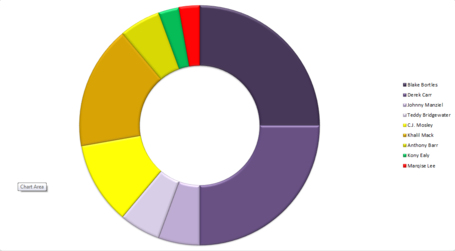 And now, the debut of this year's "Jell-o Salad" graph, where you can see the trends rising and falling for different players. 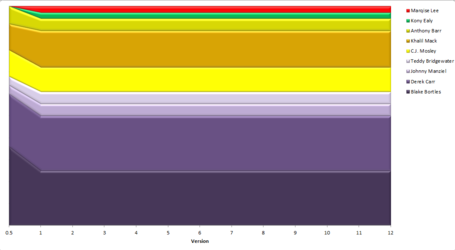 And there you have Version 1.0 of the Mock Draft Database for the Minnesota Vikings for this year. With the Combine workouts going on throughout this week, I'm guessing we'll see some significant changes going into next weekend's v2.0