Another weekend is here, which means it's time for the latest installment of the Minnesota Vikings Mock Draft Database! We're up to 44 mock drafts for this week's installment, and there have been a couple of changes as well as another position group added after this week's Scouting Combine. So, without any further ado, here is the full list of mocks we have for this week. We'll get into the trends after the table here.

Here's the breakdown for this week's data.

As I mentioned, we're up to 44 mock drafts, and the quarterback position is still the position of choice among mock drafters for the Minnesota Vikings. Of the 44 drafts we have this week, 23 (52.3%) have the Vikings selecting a quarterback in the first round. This week, Fresno State's Derek Carr officially overtook Central Florida's Blake Bortles as the most selected player for the Vikings. Carr appears in the first round 10 times (and once in the second round) in this week's installment, while Bortles appears nine times. Louisville's Teddy "Theodore" Bridgewater makes a bit of a move, now appearing four times in this week's draft database, while Texas A&M quarterback Johnny Mondo Delicious Ice Cream Football Manziel holds steady with two selections.

The biggest mover overall this week is UCLA linebacker Anthony Barr. His name appeared only twice in each of the first two installments of our database, but he's now the third-most selected player overall for the Vikings, having his name called seven times in our latest installment to lead the linebackers. Buffalo's Khalil Mack has five selections (down from six last week), while Alabama's C.J. Mosley appears four times (one more than last week). Overall, 16 of our 44 mock drafts (36.4%) have the Vikings taking a linebacker in Round One of the 2014 NFL Draft.

The new guy on the block is Oklahoma State cornerback Justin Gilbert, who went from being a no-show in our first two installments to appearing three times this week. That means that 6.8% of the mock drafts selected have the Vikings taking a corner in the first round. Gilbert had a monster combine to launch himself to the top of the board among cornerbacks in this year's class, but are the Vikings thinking about him at #8 overall? Apparently some folks think they are.

To round things out, USC's Marqise Lee and Missouri's Kony Ealy give the receivers and defensive ends each 2.3% of this week's selections, with each of them appearing once on this week's list. 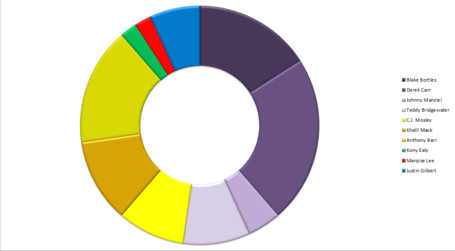 And next, this week's "Jell-o salad" graph, which shows the trends for each player selected in the first round since we started this year's database. 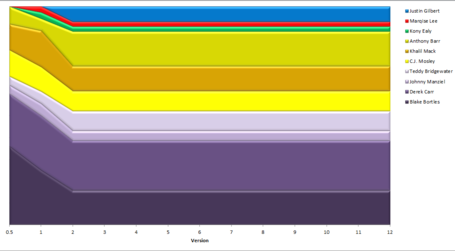 And that's this week's installment of the Minnesota Vikings Mock Draft Database, ladies and gentlemen. What do you think about what the "experts" think this year's draft holds for our favorite football team coming out of the Scouting Combine?