Because there's a degenerate gambler in all of us, isn't there?

With the release of the NFL schedule yesterday, I thought it would be nice to review what the gambling experts are giving the Vikings this year for win predictions.  And since the NFL and gambling goes together like peanut butter and chocolate, here's the over/under lines for each time from back in March: 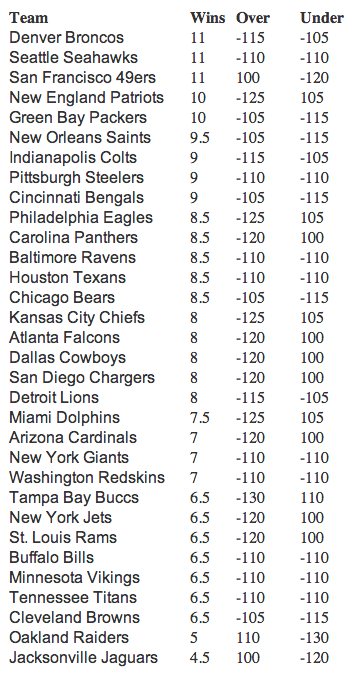 There really aren't a lot of surprises here.  The three best teams from last season have the highest over/under, and the Vikings, also as expected, are near the bottom with a 6.5.  The numbers to the right of the over/under line indicate how much you'll win for a $100 bet.  For the Vikes, it's pretty much a wash.  You'll need to bet $110 to win $100 whether you pick the over, which would be seven wins, or the under, which would be six.

That means Vegas wins.  Because Vegas always wins. Always.  Even if they don't.

The best over/under bets you could make are taking the over for the Raiders at five wins, which would net you $110 on a Ben Franklin, and you'd get the same payout for taking Tampa Bay at their under of 6.5 wins. Philadelphia, Kansas City, and Miami are also fairly enticing for betting the under, but the only other team at even money on the over is San Francisco.

So place your bets, kids, if that's your bag.