Jerick McKinnon, drafted in the third round based mostly on potential instead of proven production at his position, may end up being Minnesota's Mr. Do-It-All

Jerick McKinnon is an athletic phenom. Every year, you hear it about almost every draftee—in an industry where "rare" talent is common and "average for his position" is an insult, we've really found ways to dilute the meaning of a "freak athlete" and what it means to truly be a dominant physical performer.

Jadeveon Clowney and Aaron Donald may truly be unreal physical performers, but Jerick McKinnon is a wunderkind.

Don't believe me? Take a look at how McKinnon performed against every other running back at the combine since 1999: 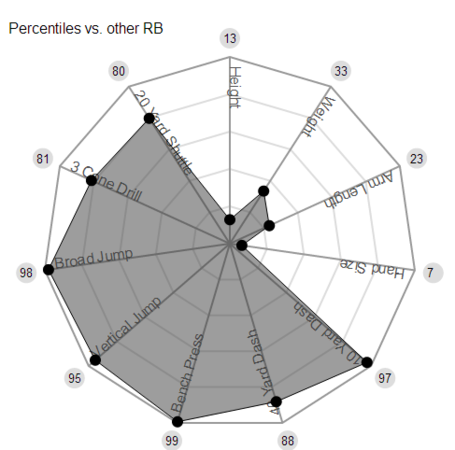 It isn't just rare to see someone score in the top percentile of every athletic category, it's nearly unheard of—especially as he scores at the top of his position not just in straight-line speed and agility, but explosion (ten-yard split, broad jump and vertical jump) and strength (bench press reps—32 at just 209 pounds).

Even if you discounted him for his weight, as we often do for speed, McKinnon still blazes past the competition. McKinnon's speed score (which takes into account weight) is 110.5, the second-best at his position. The best, Damien Williams, had one of the worst three-cone scores at the combine and had mediocre explosion scores—not to mention subpar shuttle times.

Just one problem: McKinnon isn't a running back. He played option quarterback in college, and occasionally as a wing-back in their old-school option offense at Georgia Southern—the same school 2013 training camp UDFA Darius Eubanks came from.

McKinnon's ability to read blocks with a runup from seven-yards back is almost completely untested, and he has to work out of a traditional, instead of misdirection-oriented, offense. That he has to play with patience, smaller seams and different reads is an issue, but McKinnon told us that something else would be the most difficult thing about the transition.

All of that other stuff he knows will come with time, but concentrating on his pass protection vision and technique will dominate his time in the film room and with coaches.

"I got a chance to practice [the traditional running back role] at the Senior Bowl, so I'm kind of a little bit comfortable with it," he said. "Only thing that's a little bit different is the pass protection. I really hadn't had any technique on it or coached on it. So I'm really just looking to get with Coach Wilson and learn from the older guys the techniques and practicing on it."

His first time learning any nuance with pass protection—or really anything at all in regards to pass protection from the running back position—was in the post-season all-star circuit.

"I did it the first time at the Senior Bowl and it was real difficult just because I wasn't really coached up on the technique," he told us. "It's something we've been working on here, small techniques versus different looks. Coach Wilson does a great job at breaking that down with us and going in-depth with it. We're just taking it day by day and keep working on it."

It can be pretty difficult to catch everything, especially in regards to how the protection schemes change with the playcall, but McKinnon's eager attitude also provides a small obstacle. "When they're coming at you, you get so antsy and want to fit up but you've got to be patient, you've got to have good hand placement, be physical with your hands. So I'd definitely say that [was the most difficult part]."

Once he gets that down, he expects to do it all. He's been compared to everyone from Darren Sproles to LeSean McCoy, and he thinks that's just fine. In fact, Mike Zimmer agrees.

"The 'change of pace' backs like LT and Sproles?" Zimmer said in response to a question about McKinnon's fit during today's pre-practice presser. "Similar, very similar. You'd have to ask Norv this, but from our conversations, but he's been thinking a lot about ways we can use him."

Norv has, too. And he's asked McKinnon to put on the tape.

"I watched LT," McKinnon said. "I know the other day in the running backs room, we was watching some old cut-up film of LT on there, some Rashard Mendenhall, and just watching LT come out those cuts and set up the linebacker and stem and go the opposite way was definitely exciting to watch."

McKinnon has been paying attention to a lot of running backs, in fact. The "old-school" back that he's been watching the most has been Marshall Faulk.

"I like how he carries himself on the field," McKinnon said of the Hall-of-Famer and Rams legend. "I like when he runs between the tackles and gives the 1-2 step and get in and out of it real quick."

He, like Zimmer, sees a lot of potential for how he can be used. "If I get the opportunity to return, I think I can help out in that way, other special teams of course. And then whenever they need me to come in, I'll probably come out the backfield and stuff like that. I definitely think I can contribute in that way."

The list of running backs he likes to emulate is long, but clearly slanted towards the "space backs" that are becoming vogue in the NFL. He listed Adrian Peterson, of course, but he recounted running backs like Jamaal Charles, LeSean McCoy and Darren Sproles when asked to create a list of backs he would most like to emulate.

In particular, he isolated McCoy as the best stylistic comparison for what he can do. "Just run out of that shotgun in between tackles, outside zone, just stretches and then come out of the backfield. So I would probably say something like that," he mentioned when asked what it was about McCoy that he liked so much as a comparison.

Norv Turner has had him run routes, and he mentioned that he feels very comfortable catching the ball. His short time doing it in workouts and the Senior Bowl has been a success, and he hopes to replicate it here.

That post-season circuit has been incredibly kind to him, and he knows it, too. "I think [the NFL combine] was real big. I think it helped me out a lot, just putting me in the situation I'm in right now," he said. "With what I did, having scouts and coaches go back and look at the film and obviously getting an opportunity to come up to Minnesota, so I think it helped me a lot."

If McKinnon reaches even half of his potential—and proves he can protect the passer—he'll have been worth more than a third-round pick.