What does Anthony Barr do for the Vikings Defense?

The Minnesota Vikings have selected UCLA linebacker Anthony Barr with their pick—it remains to be seen if the raw edge rusher will play purely on the edge or take other linebacker duties like James Harrison did for Mike Zimmer in Cincinnati.

Share All sharing options for: What does Anthony Barr do for the Vikings Defense?

Anthony Barr is definitely a developmental prospect, but the upside to that pick is that it may mean the development of skills that Barr has yet to show.

An extremely athletic player that only recently converted to rush linebacker on the urging of the UCLA defensive staff two years ago (he was a running back), Barr shows a lot of potential but is a surprising pick.

It is unlikely that he plays as an edge rusher as a starter for the Vikings with Brian Robison and Everson Griffen both signed to lucrative contracts. There is a very good chance he'll play the "James Harrison" role as a strongside linebacker, which would move Chad Greenway to weakside linebacker or middle linebacker (I expect the middle).

James Harrison didn't just rush the passer, but took on blocks and covered the shallow flats in the passing game, though didn't take too many snaps—400 in subpackage roles—but performed admirably in that time (his pass snaps were split 150/100 rush/coverage).

Barr has freakish raw athleticism, though some flexibility issues limited his ability to completely show it on film, and he has some questions to answer in regards to his bench press score. That said, he's an incredible specimen. Per the website, mockdraftables, you can see a radar map of how Barr compares to other OLBs: 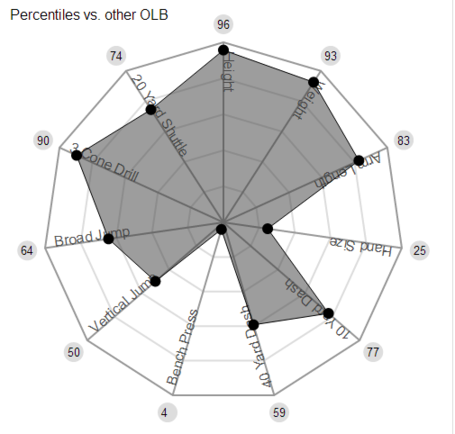 Barr is not only explosive in terms of his elite acceleration, but has a lot of leg drive to explode through tackles and take the ballcarrier down. His aggressive play style can sometimes work against him as he overruns the play from time to time, but mostly his responsiveness and agility allow him to respond to cutbacks by running backs and keep the play in front of him.

Despite only playing on defense for two years, he has a good understanding of angles in the limited time he's been tested. He also has fantastic body control and naturally has a good understanding of what to do with his body and how it works. His ability to integrate new technique into onfield talent is surprising, and probably a big part of the reason the Vikings were willing to make the pick: how quickly Barr picked up his new position despite his short time there. Zimmer has consistently emphasized smart, coachable players (who are "tough") and there's no question that Barr meets those requirements.

That fluidity needs to be something he maintains with the Vikings if they do plan to play him at linebacker instead of defensive end, because he'll need to turn and run with tight ends, fullbacks and running backs.

He's not a good form tackler and has extremely poor hand usage at this point in his career. His instincts have been acceptable but not eye-popping and his run discipline has been lacking. Theoretically, moving further back from the ball may be able to solve this issue.

That he's an extremely raw player who has only played two years at the position and progressed far more than anyone could have expected means that these negatives—which are all technique-related (except instinct, where Spielman disagrees with me)—are probably very fixable to him.

His fluidity appeals to Spielman more than anything else, and the versatility drives the pick. In the post-pick presser, Spielman mentioned that Barr's only weakness in coverage is experience. He has the length, speed, fluidity and instincts, according to him, to be a major player in all aspects of the game.

This should move Chad Greenway to WLB, as predicted at the beginning of the offseason.