With the 96th pick in the 2014 NFL Draft, the Minnesota Vikings have selected running back Jerick McKinnon from Georgia Southern University. 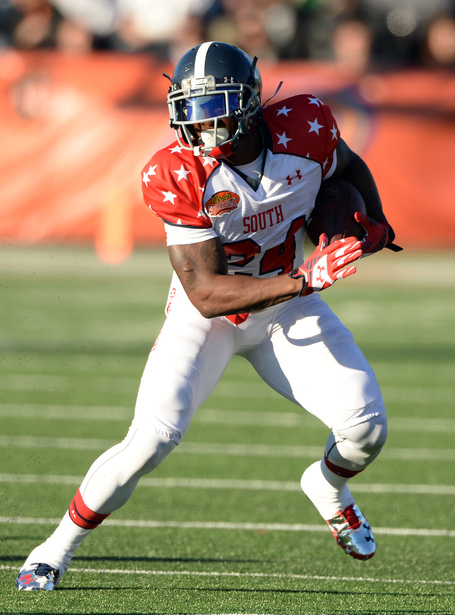 McKinnon is a. . .well, we'll call it an "interesting" pick at this point. He did a little bit of everything at Georgia Southern, playing quarterback, running back, and defensive back. He ran for 316 yards in a 2012 contest against Central Arkansas, and was the trigger man behind the Eagles' upset over the University of Florida in Gainesville, Georgia Southern's first ever victory over a BCS team.

According to one source, McKinnon might have had the best performance of all the running backs (or any other player) at the 2014 Scouting Combine.

No player did better on our scale than Georgia Southern running back Jerick McKinnon, who posted top-five performances in the 40-yard dash, bench press, broad jump, vertical jump, three-cone drill and the short (20-yard) shuttle. (The 60-yard shuttle is the other drill.) It's impossible to name a top overall performer, however, since players from different position groups don't all take part in the same number of drills.

McKinnon appears to be a man without a position at the present time. One would assume that the team is going to try him at running back behind Adrian Peterson, but Mike Mayock said on NFL Network's draft coverage that he might be able to start at safety in the National Football League. So, at this point, only the Vikings know for sure.

If you count this as a selection of a running back, then it fills a need. McKinnon is obviously a great athlete, but it remains to be seen what the Minnesota Vikings are going to do with him.