Over the past week or so, I'm sure you've seen the "$15 NBA Team Challenge" that has been going around the internet, and it's a cool little idea. The concept is that you get $15 to put together the starting five for the NBA that you feel is the best from a list of all-time greats.

So, I thought this was a cool enough idea that I wanted to apply it to our favorite football team, the Minnesota Vikings. But football has a lot more spots to worry about than basketball does. And that's fine. . .we just increase the budget by a lot. With that, I bring to you. . .

The idea is the same. . .you have $75 to build a full Minnesota Vikings' lineup on both sides of the ball. . .eleven guys on offense, eleven guys on defense, one kicker, one punter, and even a coach. You can build your team how you want to. . .want to load up on defense? You won't be able to get a lot of big name offensive guys, and vice versa.

To start, let me give you the players, and then a couple of minor constraints that you need to follow. We'll start with the offense. (By the way, you can click on both of these pictures to embiggen.) 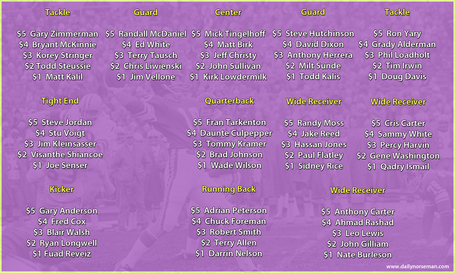 And now, the defense. 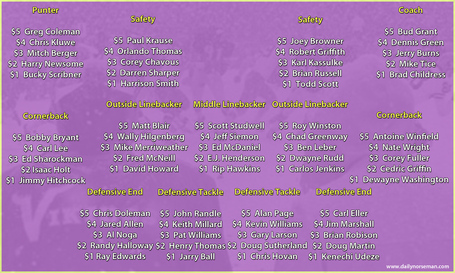 (Tremendous thanks to our friend Jesse Lund over at Twinkie Town for putting together the graphics. And, yes, there may be a typo or two on them that I didn't catch. Just roll with it. . .you know who everyone is.)

So, here are the guidelines.

And that's about all I've got for this one. Have at it in the $75 All-Time Minnesota Vikings Team Challenge, ladies and gentlemen!