Okay. . .we generally don't do this for non-NFL events or anything like that, but it appears that enough people are getting excited over this where we will break off from the standard Open Thread for this one.

Today is the final day of "group play" in the 2014 World Cup in Brazil. There will be two Group G contests going on at the same time. . .one between the United States and Germany, and another between Ghana and Portugal.

Here are all the scenarios for the two games, thanks to our friends at Center Line Soccer. 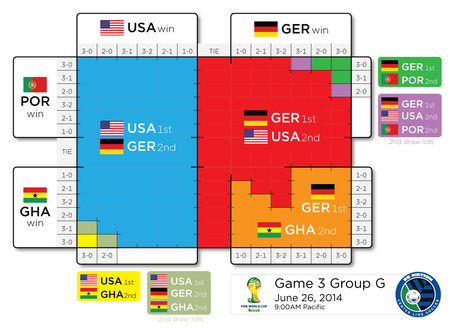 Basically, if the United States wins or ties, they move onto the "knockout" round, which gets underway next week. The top two teams in Group G will match up with the top two teams in Group H in the knockout round. Group G's top team will take on Group H's second-place finisher on Monday, while Group H's top finisher will take on the second team from Group G on Tuesday. The standings in Group H will be determined by the Russia/Algeria and Belgium/South Korea games that will take place after the Group G games have finished up, but as it stands right now Belgium would be the top team from Group H while Algeria would be in second.

Here are all the broadcast particulars for today's match-up:

Who: USA vs. Germany

You might also want to check your local radio affiliates to see if anyone in your area is carrying the broadcast.

Univision will be streaming the game for free. Of course, the audio will be in Spanish, but really. . .Spanish soccer calls are always way cooler than English ones. (See also: Cantor, Andres) Univision also has a mobile app, Univision Deportes.

(Thanks to our friends at Cincy Jungle for a good portion of that information.)

So there you go, ladies and gentlemen! We'll be watching and following along with everything right here.