Share All sharing options for: Minnesota Vikings On Etsy: Artwork, Lingerie, and More

Several of our brother sites in the SB Nation family of football sites have done something similar to this, and I thought it would be something interesting for everyone to enjoy.

Etsy, for people that aren't familiar with it, is a site that allows you to purchase vintage items or items that people have hand-made. It's a bit like EBay, I guess, but geared more towards folks that create their own stuff.

Going to Etsy and typing in the words "Minnesota Vikings" returns 1,800 items. I sifted through all of these because. . .well, it's Sunday afternoon and I'm kind of bored. There are some interesting things on here, and I will be sharing some of them here with you.

Since I don't want you thinking that I was kidding with the title there, let me share one of the first things that appears on the Etsy search for Vikings stuff. . .actual Minnesota Vikings-themed lingerie. 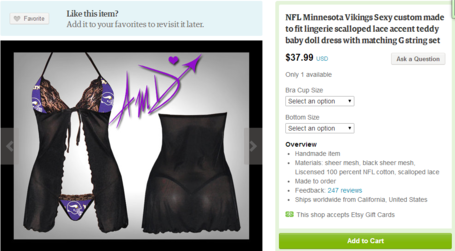 The place has a five-star review with almost 250 reviews going for them, so they've got to be doing something right. It looks like they offer other teams too, but really. . .why would you bother?

And yes, ladies, there's a g-string for your significant others on Etsy as well. Lest you think we're discriminating or something.

If that's not really your thing, how about a bracelet in the colors of our favorite football team instead?

If you know a couple of Vikings fans that are getting married in the near future, what would be better to top their cake with than these? 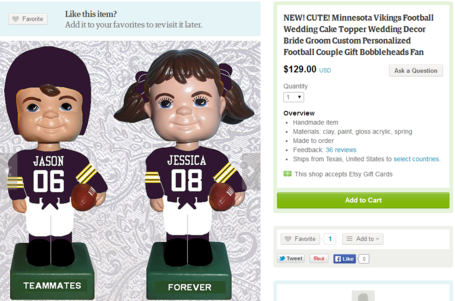 They're a bit on the expensive side, but they're custom painted with names and the whole nine yards. Would definitely be something for the happy couple to hang onto for the future. There are some other wedding cake toppers on the site, too, but this is the only one I think I saw that's customizable like that. 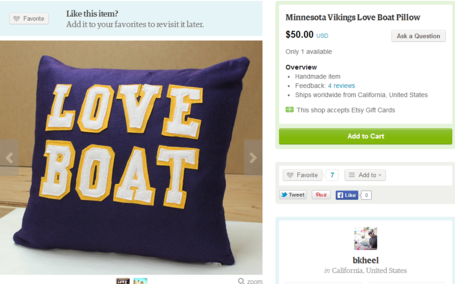 Though I'm not sure if I know many Vikings fans that would want that. Maybe it's for those "special" fans of other teams that are still making jokes about it nearly a decade after it happened. You know. . .idiots.

If you'd like some artwork to liven up your "man cave" or anywhere else in your house, what would do it better than this? 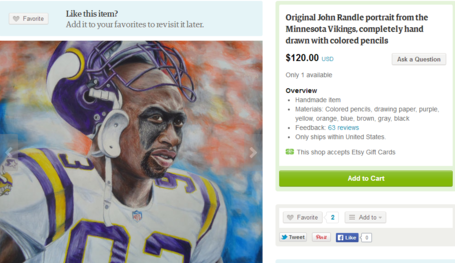 Yep, a hand-drawn picture of John Randle, complete with Legion of Doom-style face paint. But there's only one available. . .someone better get on it if they want it.

Are you allergic to penicillin or have some other medical issues that people might need to know about if something should happen to you? Well, let people know that and that you're a Minnesota Vikings fan! 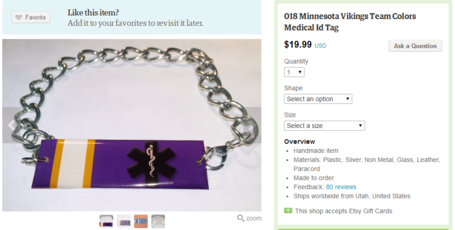 The Vikings have driven most of us to drink on several occasions, and thanks to Etsy, we can now keep those two things even more closely connected. 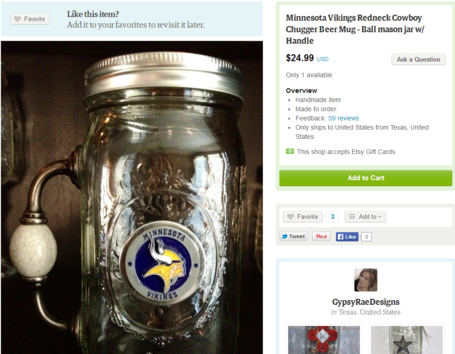 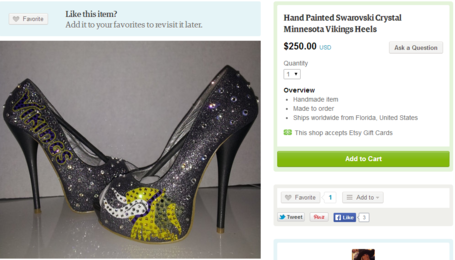 $250 sounds like a lot of money, but that's not the most expensive Vikings-related item that Etsy has to offer. That distinction goes to these.

And, at the other end of the spectrum, the least expensive item you can get from Etsy that represents our favorite football team is one of these. 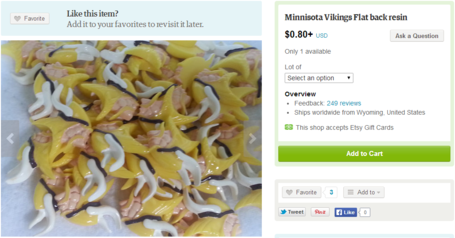 To be honest, I'm not even sure what those are or what they're for. . .but, hey, they're only eighty cents each.

Like I said at the top of the post, there are 1,800 items on Etsy that are connected to the Minnesota Vikings in some way. I've only presented you with ten. I've tried to highlight some of the ones that might make you chuckle a bit, but there really are a lot of cool things on there as well. If you're looking for a unique, Vikings-themed gift for somebody, it's worth your while to check it out.