That's right, ladies and gentlemen. . .on this day in 2006, yours truly cobbled together the first article that ever appeared on this website. At the time, I really wasn't sure what I was getting into, but the fact that this site is still here is a testament to the people behind the scenes as well as all of you.

I'm not sure how many folks have been here since the site looked like this: 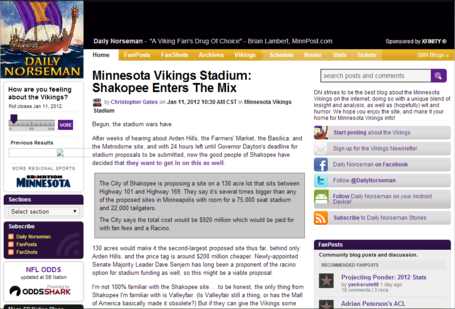 But regardless of how long you've been here, we're happy that you've chosen to make us a big part of your experience of finding news and information on the Minnesota Vikings. When this site came online, SB Nation had sites for just ten of the 32 NFL teams (we were #10), and just 60 sites overall. Now, the network has over 300 different sites, and is doing nothing but getting bigger and more important every day.

Over the course of the last eight years, we've served up nearly 20 million visits and over 40 million page views. We've been through plenty of highs and lows, played a big role in getting a stadium built, and really grown into more of a living, breathing community than just your normal, run-of-the-mill sports web site.

Even though I'm the only one here that's been around since Day One. . .witness our first ever Game Thread, which was literally me talking to myself for three hours (save for, I believe, four comments). . .I do believe that the best move I've made during that time is surrounding myself with a group of people that I would put against any other team-centric site in the football blogosphere, Vikings or not, SB Nation or otherwise.

With as much as things have changed since this site went live in 2006, there's no way that I could handle this by myself at this point, and thanks to the rest of the crew here at The Daily Norseman, that's something I don't have to worry about. So, I want to give my most sincere thanks to every member of the Daily Norseman staff. . .Ted, Eric, Kyle, Skol Girl, Arif, Mark, CCNorseman, and Di. . .whether they've been here for a long time or they're just coming on board. It's very easy to be the "Fearless Leader" when you have a group of incredible people like this to lead.

But, as always, I want to thank all of you out there for making this community what it is. We see it every day in the Open Threads, and in the Game Threads during the season. . .99.9% of the time, this is just a really fun and enjoyable place to be. I know I've said this lots of times before, but without you all, there is no Daily Norseman. Thank you to all of you for giving us the opportunity to provide what we provide to you. After eight years, I know that I'm still having fun, and hopefully we'll all be here doing this together for a lot more years going forward.

So, on our eighth birthday, thanks to each and every one of you, from the staff to our readers, for making us the biggest and the best at what we do.