Vikings Top Plays Of 2013: Brian Robison Goes To The House

Share All sharing options for: Vikings Top Plays Of 2013: Brian Robison Goes To The House

The Minnesota Vikings' defense didn't have a lot of big moments in 2013, but they got one of the more memorable plays the team would have very early on in the team's Week Two match-up against the Chicago Bears at Soldier Field.

Leading 14-7 halfway through the second quarter, the Bears were looking at a 3rd-and-9 from the Minnesota 31-yard line. The Vikings couldn't afford to fall behind any farther at that point, and a couple of the Vikings' more prominent defenders would ensure that they did not. Let's take a look at the play with the help of the All-22 film from NFL.com. 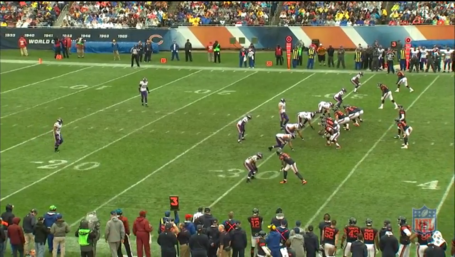 The Bears come out in a three-receiver set with a tight end on the right-hand side of the formation and one running back next to Jay Cutler in the backfield. The Vikings counter with their nickel package, putting their corners up tight on the line of scrimmage and keeping their two safeties deep. 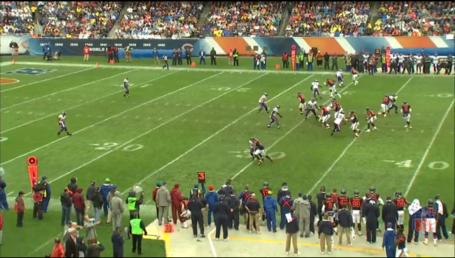 Shortly after the snap, you can see that Brian Robison has already beaten his man on Cutler's right side. Jared Allen, on the other hand, looks like he is getting slowed down a bit by his man. . .but that wouldn't last long. 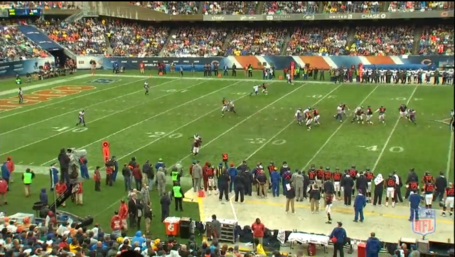 As we move a little further along into the play, Robison has actually gotten routed around Cutler. Because the Vikings' secondary is actually doing a pretty damn fine job of covering down the field, Cutler decides to bail out of the pocket to his right. 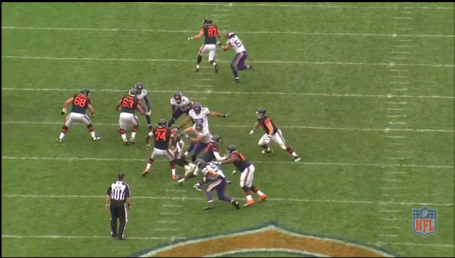 At this point, Allen disengages from his blocker and begins his pursuit of Cutler. Robison sees that Cutler is on the move and comes back around to chase. 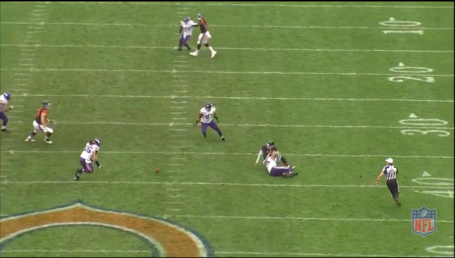 Allen chases Cutler down in short order, and knocks the ball out of Cutler's hand, where Robison is waiting to pounce. He picks it up and handles the rest from there, going all the way to the end zone for a 69-yard score. The other Viking closest to the ball in the frame there is Everson Griffen, who was lined up as an inside rusher on the play. As you watch the video of Robison's return, check out the wheels on Griffen as he gets downfield to escort Robison to the end zone.

That play was Robison's first NFL touchdown, and allowed the Vikings to tie the game at 14. They'd eventually fall to the Bears on a last-second touchdown pass, but  the Vikings' outstanding defensive end tandem gave Vikings fans a big play to remember even in the wake of such a heartbreaking defeat.