But sometimes, even AD needs a little bit of help to get by, and he got a significant boost from an unlikely source in the Minnesota Vikings' game against the Dallas Cowboys in Week 9.

Trailing 20-17 with six minutes remaining in the fourth quarter, the Vikings were looking at fourth down and less than a yard from the Dallas 11-yard line. Figuring that he didn't have anything to lose at that point. . .because, seriously, he didn't. . .Leslie Frazier decided to keep his offense on the field rather than call on the field goal unit. Let's take a look at this play with the help of the All-22 film from NFL.com. 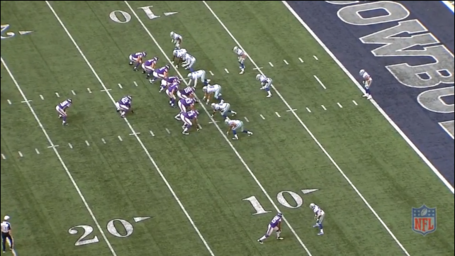 The Vikings decided to go extra large on this play, as you'd expect, with Chase Ford and John Carlson lined up next to Matt Kalil on the left-hand side of the line (Ford is closest to Kalil on the play). Jerome Felton is in front of Adrian Peterson in the backfield, and Greg Jennings is the lone receiver in the formation, split wide right. The Cowboys counter by putting nine defenders in the box, including seven up on the line of scrimmage, with one safety (Jeff Heath) at the goal line and one corner on Jennings. 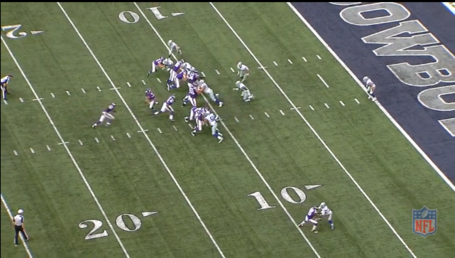 Right after the snap, we have a big pile-up at the line of scrimmage, and you can already see the hole between where John Sullivan and Brandon Fusco were lined up. 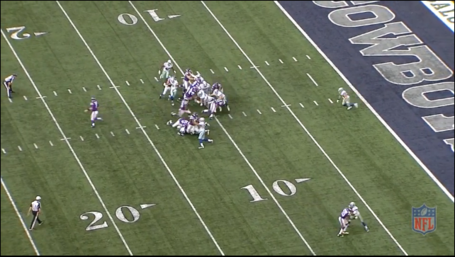 As Peterson gets closer to the line, the original hole has collapsed, but a new alley has formed to Peterson's right. Everyone else is engaged, and Heath comes up to attack Peterson. 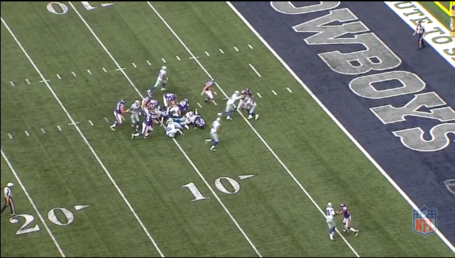 By the time Heath has reached Peterson, he's easily gained the yardage needed for the first down, and now two Cowboys have a hold of him, so this is where the play ends. Except. . . 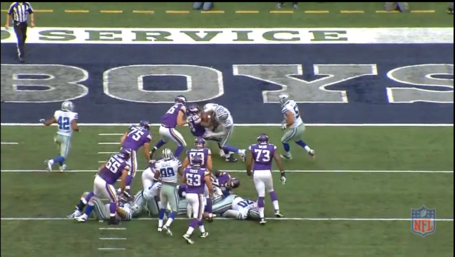 BAH GAWD, KING, THAT'S CHASE FORD'S MUSIC! WHO IN THE HELL IS CHASE FORD? WHAT IN THE. . .HE IS CARRYING ADRIAN PETERSON TOWARDS THE GOAL LINE! BUSINESS IS FIXIN' TO PICK UP AT JERRYWORLD!

And here is the thrilling conclusion:

That play gave the Vikings a 24-20 lead in the late stages of the game, but. . .stop me if you've heard this one. . .the Cowboys marched unimpeded down the field on their final drive and scored the go-ahead touchdown to eventually take a 27-24 victory.

Adrian Peterson is still awesome, though. That probably won't change any time soon, either.