Uni Watch has released proposed designs for uniforms that the Vikings were reportedly considering back in 2003. Let's take a look.

The Vikings unveiled new uniforms before the 2013 season. You might recall how the team slowly revealed clues about the new look via a "Vikings Uniform Insider" page that required you to post all over social media to reveal hints. (I definitely recall because I took it upon myself to do the legwork and share the clues.)

You might also recall how the Vikings were scheduled to debut their new look at the team draft party last year only to have their new look scooped by Paul Lukas, who runs Uni Watch, the leading authority in all things related to sports uniforms. On Wednesday, Lukas was at it again as he revealed never-before-seen Vikings uniforms.

But don't worry--you're not going to have to buy new uniforms to keep up with the team anytime soon.

Lukas got his hands on prototype uniform designs from back in 2003 that were prepared for the team by Reebok, who held the NFL's apparel rights until 2012. He received the designs from a reliable source that "confirmed their legitimacy with another source who used to work for the Vikings". When Uni Watch runs something uniform-related, you can almost always trust the validity.

The story on Uni Watch provided two prototypes consisting of three uniforms each. The first is the cover photo above; the second is below: 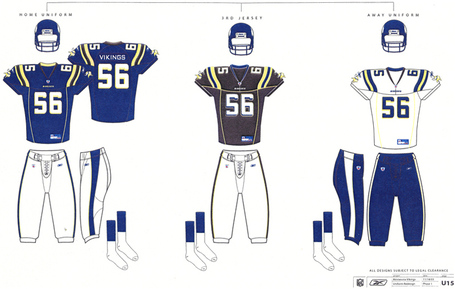 Personally I think the team made the right choice by not going with these designs. Perhaps I would have been more enthused about them eleven years ago, but I'm glad the Vikings kept the simpler uniforms they had starting in 1998. Both sets of black uniforms look kind of ridiculous with the purple helmets and socks (plus they would have looked way too much like the Ravens). You can see the beginnings of some elements that ended up making it into the 2008 uniforms, such as the irregular stripes on the pants and shoulders. Considering how most Vikings fans felt about our last set of uniforms, I'm guessing the reception for these prototypes wouldn't have been too warm either.

So what do you think? Did the team miss an opportunity or dodge a bullet back in 2003 by passing on these designs from Reebok?

I'll tell you what I think--I think it's a good thing that Training Camp starts next week so we'll have actual football to discuss soon!