We interrupt the eight thousand posts about the Chris Kluwe/Mike Priefer investigation we've done today. . .or, at least, it seems like that many. . .to bring you a look at another one of the plays from 2013 that fans of the Minnesota Vikings should remember for quite a while.

Someone pointed out in the comments of yesterday's play breakdown that, hey, all of the previous plays came from games that the Vikings lost. Well, considering that the team was 5-10-1 last year, that's probably going to happen a lot. But, just for a change of pace, let's go with one from a game that the Vikings actually won and highlight Greg Jennings' 70-yard touchdown reception against the Pittsburgh Steelers at Wembley Stadium in London.

We find ourselves in the first quarter of play with a little more than eight minutes left on the clock and the Vikings holding onto a 3-0 lead. 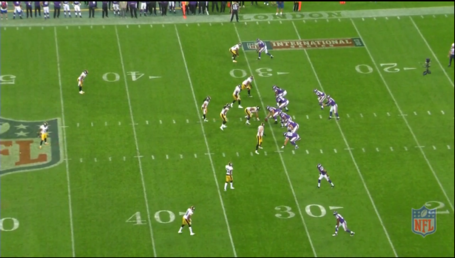 The Vikings come out in a three-wide set, with Kyle Rudolph on the left side of the offensive line. Jarius Wright is in the left slot with Jennings out wide, with Jerome Simpson wide right and Adrian Peterson in the backfield with Matt Cassel. You'll notice that Jennings and Wright are getting a bit of cushion from their defenders, while Simpson's man is right up in his face. 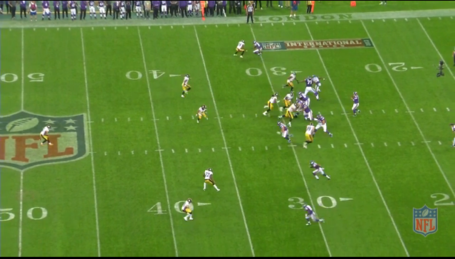 Cassel takes the snap from John Sullivan, and you can see that he's already on to Jennings as his first look. As Jennings is still getting nearly ten yards of cushion in a 3rd-and-4 situation. . .seriously, is Alan Williams running this defense. . .we'll see that Jennings has an easy choice to make. 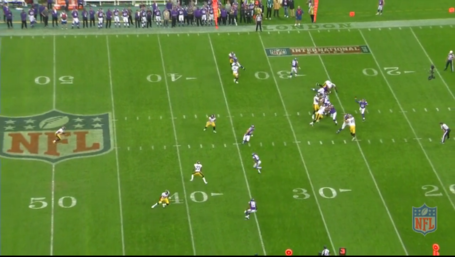 The ball is out of Cassel's hand here, and you can see that Jennings is past the sticks and will have a relatively easy catch for the first down. Wright and Simpson are taking their men towards the center of the field, while Rudolph is running more of an out route. 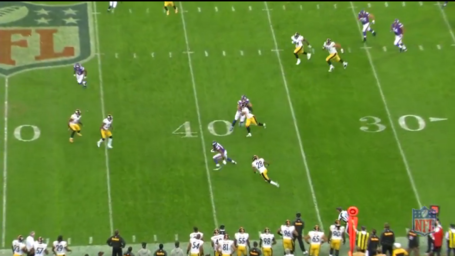 After the catch, Jennings makes Ike Taylor miss and turns upfield. Rudolph is locked on Troy Polamalu, but there are two other Steelers (along with Taylor) that are ready to bring Jennings down. 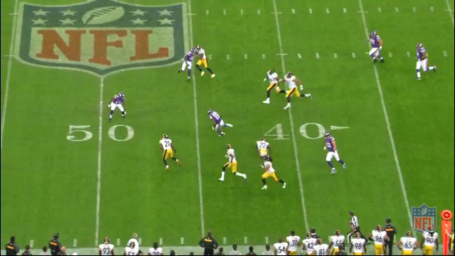 Jennings makes one of those defenders, William Gay (the one that looks like he's ready to fall down at about the 42) miss, and now the odds are a little more stacked in Jennings' favor. Simpson has headed off his man for the time being, and the one guy left is safety Robert Golden (#21). 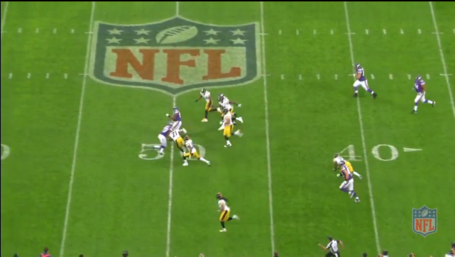 Well, Jarius Wright puts a stop to that with a very nice block, and it's all Jennings from there. He outruns the rest of the Pittsburgh defense for the final 50 yards to complete the play and put the Vikings up by a score of 10-0.

It was Jennings' first touchdown as a Viking, and a sight that we'll likely see repeated with much greater frequency in 2014. The Vikings ultimately held off the Steelers' last-minute rally to secure a 34-27 victory for their first win of the season.

So there, we have a Vikings' highlight from a game the team actually won. How 'bout that?