As you'd probably expect, a list of the Minnesota Vikings' top plays of 2013 is going to prominently feature two names. . .running back Adrian Peterson and receiver Cordarrelle Patterson. They're two of the most exciting players in the National Football League, and a threat to score every time they touch the football. We did one of AD's better runs the other day, so let's give the man they call "Flash" his turn this time.

The final game of the 2013 season, and the final game in the history of the Metrodome/Mall of America Field/whatever you want to call it featured the Vikings hosting the Detroit Lions. Both teams were just playing out the string, much to the chagrin of the Lions as they appeared to be in control of the NFC North midway through the season.

We'll pick up the action with just over three minutes remaining in the first quarter of play in a scoreless game, and we'll look at the play with the help of NFL.com's "All-22" film. 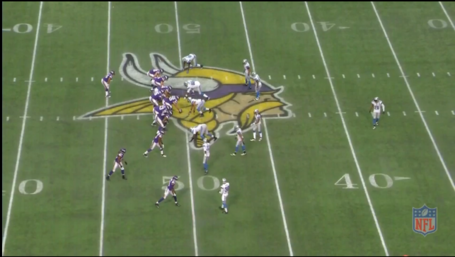 The Vikings come out with trips right, with Greg Jennings split out the widest, Jarius Wright closest to the line, and Cordarrelle Patterson in the slot between them. Matt Asiata is offset to Matt Cassel's left, and Rhett Ellison is the tight end on the left side of the line. 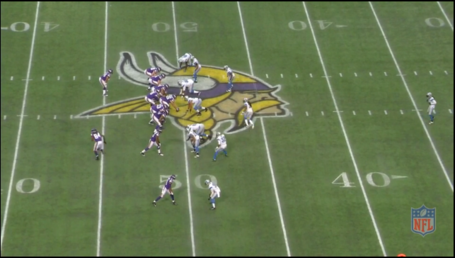 Prior to the snap, Patterson comes in motion from right to left, into the backfield. This causes him to be followed by two Detroit defenders, linebacker Rocky McIntosh and cornerback Rashean Mathis. 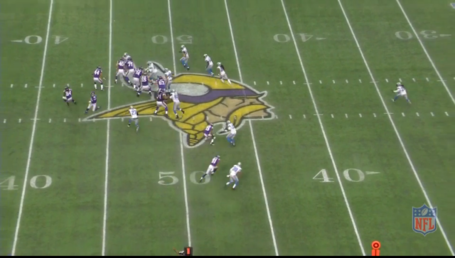 At this point, Cassel has taken the snap and pitched to Patterson, who has already started to reverse field. From the way the blocking is setting up. . .man, it sure does look like this was supposed to be a pass play, eh? None of the offensive linemen are downfield, and the entire left side if the field is basically walled off. 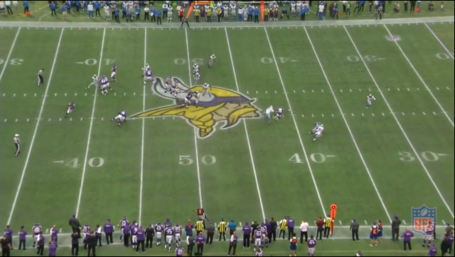 I just tossed this picture in here to point out a couple of things. See the guy in purple and white at the Minnesota 43-yard line? That's Matt Cassel, who took the liberty of flattening Lions' safety Glover Quin. Second, all of the Vikings' offensive linemen are still behind the line of scrimmage. 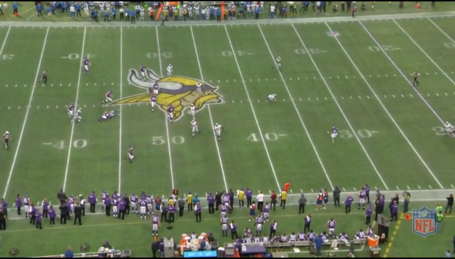 At this point, it's pretty clear that Patterson has changed his mind about the whole "throwing the football" thing, and it's a good thing. . .offensive tackle Phil Loadholt is just over the line of scrimmage. McIntosh has fallen down near the hashmarks, while the man he was covering. . .Greg Jennings. . .is all by himself at about the 30-yard line. Patterson has two Lions closing in, though. 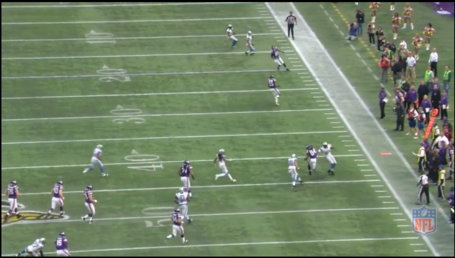 And, really, the rest of this play is just Cordarrelle Patterson being much faster and way more athletic than everybody else, as he completes a 50-yard touchdown run to give the Vikings a 7-0 lead. We've got an "eye in the sky" fan video of it from YouTube, since I can't find a decent one that I can embed otherwise.

This team is pretty lucky to have a talent like Cordarrelle Patterson on it, folks. He's going to blow up this year in a major way.

And hey, that's two whole plays in a row from games that the Vikings won. Pretty sweet, eh?