Eric gives his news and notes from an eventful afternoon practice at Vikings Training Camp. Plus, an exclusive interview with Kicker Blair Walsh.

In any NFL Training Camp, you're bound to have your ups and downs while working out the kinks. Schemes intended to maximize protection sometimes end up in blown coverages. Passes intended for open receivers sometimes clang to the ground. And large vehicles intended to film practice sometimes crash through fences. Today was one of those days.

Yeah, we'll get to that last one a little later. For now, let's focus on the football.

Before I get into my notes, I wanted to follow up on the Jerome Simpson situation. I stated in my morning recap that the more people I talk to in Mankato, the more I felt like he wasn't going to make the team. Now I have a slightly different theory.

Of course this is all predicated on Simpson actually getting suspended--there's a very distinct possibility that he doesn't. I'm not sure how his offenses are categorized, but basically the league might not put a DUI and getting weed mailed to your house under the same punishable umbrella (as dumb as both offenses are). For argument's sake let's say Simpson does get suspended for 2, 4, 6, or whatever number of games. Couldn't they do the same thing they did with DeMarcus Love last year?

Love was suspended for the first four games of 2013, yet the Vikings kept him on the team because he didn't count against the active roster of 53. As soon as he was reactivated, the team decided they didn't need him and cut him loose. Couldn't they repeat that with Simpson? If Simpson returns from his suspension and the Vikes decide they're still all good in the wide receiver department, they could waive him. But if they suffer a couple major injuries while he's suspended, they could put a guy on IR and give Simpson another shot. Again this is all assuming Simpson actually does get suspended and there are likely some cap ramifications involved, but it's food for thought at the very least.

The football was fun to watch, but the highlight of the day--nay, the highlight of THE ENTIRE TRAINING CAMP SO FAR--came just off the practice field. A poor Vikings intern--we'll call him Chip to protect his identity (and because I don't know his actual name)--was charged with moving one of the "cherry pickers", the contraptions that can extend high in the air so teams can film the action from above to get a better view. After Chip collapsed the cherry picker and started to move it, he started inching precariously close to the fence that surrounds the practice fields. He tried to turn away from it, but the wheels just moved the big vehicle closer to the fence.
And then...well, this happened. 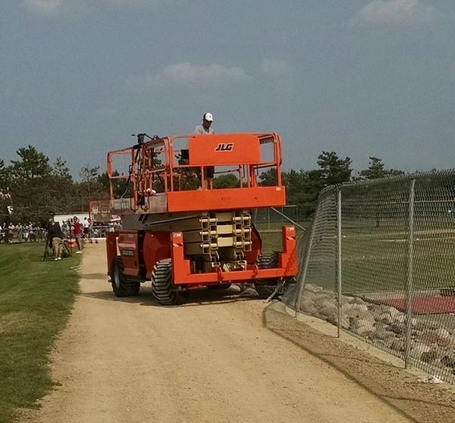 Chip tried desperately to correct his mistake, but he only made things worse. By the end of the ordeal, and entire section of the fence was collapsed and one of the wheels had broken completely off the axle. 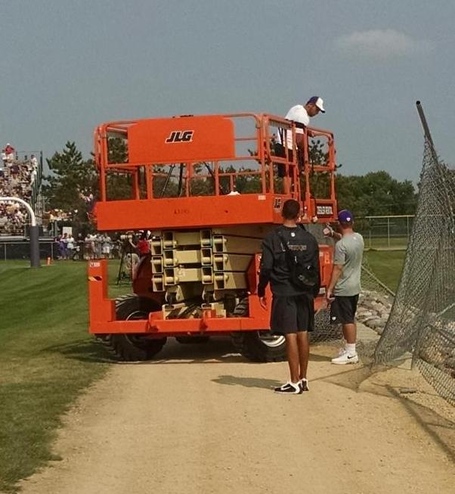 And yes, there were roughly 15 bloggers and reporters standing within mere feet of this incident. All with phones and cameras and Twitter accounts like me. Poor, poor Chip. His exasperated swearing at his massive blunder reminded me of Ralphie from A Christmas Story:

When they finally freed the cherry picker from the grasp of the chain link fence, the crowd in the bleachers gave a sarcastic cheer.
I sure hope ol' Chip didn't get fired today.

Of course I can't top that story, but I did get a quick exclusive interview with Vikings kicker Blair Walsh after FenceGate 2014. Here's how that went:
Daily Norseman: Now that you're in your third Training Camp and you're a grizzled veteran, what are the little things you're trying to work on during these practices?
Blair Walsh: Just a lot of form stuff. You can't kick every day because you'll get tired real quick and it would be tough to maintain that. But we're out here working on form stuff trying to perfect our technique.
DN: What about your technique are you trying to improve? Is it plant foot placement, how you swing your leg, where you're focusing?
BW: Little stuff. I want to get better at right hash kicks. I've been working a lot on that the past couple days. Putting the ball directionally on kickoffs better. There's little things that you're always getting better at that you learn really matter.
DN: With playing outside at TCF Stadium this year, Mike Preifer said you guys even have the wind patterns already mapped out there? You're pretty familiar with the wind there already?
BW: Jeff [Locke] has those diagrams down the best, I just helped him out with it. We're just going to go out there and play and make it our advantage. We're going to understand some of the wind patterns, but at the end of the day you gotta go out there and do your job.
DN: Is there going to be a change is how and when you practice before games during the season as it gets colder in Minnesota? I know you still did a lot of practices outside before, but are you going to visit TCF before home games?
BW: Yeah, that's definitely possible. Now that we're not going to be playing our home games outside, when we have a home game that week we'll be practicing more outside. But we played in a lot of bad weather games last year as well and I think it was a good test so we're going to be used to it.
DN: I know you're a big soccer fan so I have to get a couple of quick thoughts on the World Cup. How do you think the U.S. team did and what did you think of the tournament overall?
[Editor's note: Sorry folks. I'm a soccer fan, he's a soccer fan. I just had to ask this non-football question to Walsh. Deal with it.]
BW: I think they did well with how they played. I know they played together and as a team and had some good results. I think you can look at the positive side and the way they played against Portugal, they really dominated Portugal and they were a top five team. But then I thought they played kind of sloppy against Germany and Belgium. All in all I think soccer is trending upward for us.
DN: Finally, it's a question I gotta ask you. When was the last time you talked to your former punter...Drew Butler?
[Editor's note: Ha! I bet you thought I was going to ask about that other punter!]
BW: [Laughs] Two days ago! He just signed with the Detroit Lions. [I checked; it's true.] We talk quite often; he just got married this offseason--congratulations to him and his wife--but yeah, he's a good guy. One of my best friends.
DN: Alright, I appreciate your time Blair.
BW: No problem, thank you.
Thanks again to Walsh for being a good sport and taking a few minutes to talk.
I'll be back at camp Saturday to cover the morning practice, the evening scrimmage at Blakeslee Stadium, and hopefully finish my notes on the defensive players so I can provide that to you on Sunday. Stay tuned!