All the Vikings do under Head Coach Mike Zimmer is win. At least in the preseason.

Winning is always more fun than losing. Even in games that don't count. The Vikings won all four of their preseason games in 2014. Yes, the 2008 Lions also won all their preseason games and preseason results are rarely indicative of regular season success. But watching Vikings wins always beats the alternative regardless of the circumstances.

You can find them all here. We'll go through a few stats in this recap, but we'll let you do a deep dive of the fourth preseason game stats on your own time, you weirdo.

In honor of our very own Ted Glover, I'll address his favorite Twitter question first: #HowDidTeddyLook? Teddy Bridgewater got the start on Thursday and led the Vikings to the game's only touchdown on the first drive of the game. The Vikings traveled 80 yards in 12 plays thanks to a healthy dose of runs from Jerick McKinnon and Joe Banyard. The drive culminated with a gorgeous corner fade route pass from Bridgewater to Adam Thielen. Unfortunately Thielen went out later in the game with an apparent hip injury; let's hope it isn't anything major because Thielen has truly been a breakout player this preseason.

Teddy played about halfway through the second quarter before Christian Ponder took over for the remainder of the game. And Ponder played like...well, Ponder. His final numbers looked pretty good but he was still rather inconsistent with many of his passes. He did lead the Vikings' offense to a few Blair Walsh field goals, who finished the preseason strong by going 4-of-4 on his kicks.

Banyard and Dominique Williams got the majority of the workload in the running game, getting 18 and 15 carries respectively. The ball was spread out to a number of receivers tonight; Allen Reisner continued his productive preseason by leading the team in both receptions (4) and yards (33). Holding your opponents to one meaningless fourth quarter field goal usually means your defense had a good day. The D looked good in a lot of areas, but there are still a lot of questions to be answered as the team takes on the St. Louis Rams next week.

For instance, who the heck is going to be playing linebacker? With a lot of injuries to the LB corps the Vikings fielded some weird personnel packages. At one time there were three middle linebackers on the field at once: Jasper Brinkley, Audie Cole, and Michael Zimmer. After tonight's up-and-down, mix-and-match performance from that unit, not many people outside of the Vikings coaching staff have much of a clue what the team is going to do with that part of the depth chart after Anthony Barr and Chad Greenway.

The backup defensive line acquitted themselves quite well. Corey Wootton had an excellent strip-sack of Zach Mettenberger in the second quarter. His teammates consistently pressured Mettenberger and Dominique Davis throughout the game. 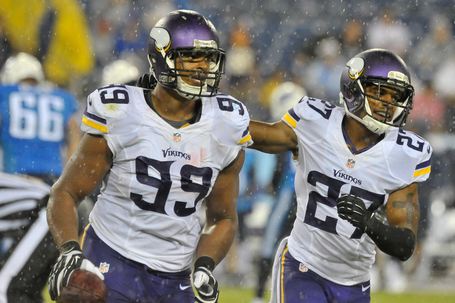 The secondary also rotated in a ton of players as the coaches took their final look at who may or may not make the final cut this weekend. Julian Posey came up with a nice late interception of Davis. Antone Exum showed why the Vikings drafted him with an absolutely HUGE hit on a ball carrier in the fourth quarter. However, he got the worst of the contact and had to leave

Blair Walsh continues to prevent us from getting a good look at the kickoff coverage team by forcing so many touchbacks. We already mentioned his perfect day on field goals. Both of Jeff Locke's punts went over 50 yards although the first went into the end zone. Locke had an excellent hold on a high snap during one of the field goal attempts. The return game was nonexistent for Minnesota tonight. No seriously, nothing happened. The Vikings didn't have a kick return and Sherels returned the only punt return of the night for -1 yard. 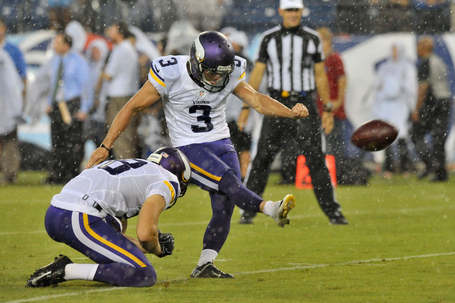 The final cuts and practice squad signings will come this weekend. From there the final 53 will prepare for the regular season opener in St. Louis. We'll have real football that counts in just ten short days!