We can talk about the validity of Power Rankings all we want, but it does, in fact, give us something to talk about. Plus, this is going to have graphs to track how the Minnesota Vikings rise and fall from week to week, and hey. . .if the Mock Draft Database has taught me anything, it's that people love them some graphs.

(Big thanks to 3k from our friends over at Turf Show Times, whose post over there was the inspiration for this one and from whom I got permission to steal borrow steal this idea.)

These are just a few of the sets of Power Rankings that are out there. If you think that there are any other sets that should be included, feel free to throw them into the comments. 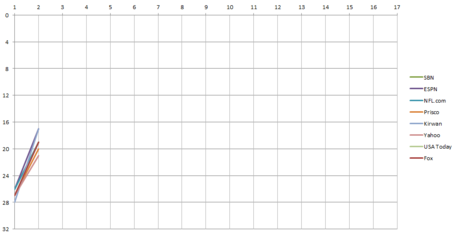 As you'd expect, the Vikings' rather convincing Week 1 victory has them trending upwards pretty much everywhere. Here is some of the data for this week's rankings.

So, what are they saying about our favorite football team? Let's have a look around.

In maybe the most surprising blowout of Week 1, the Vikings went in to St. Louis and just dominated the Rams. Cordarrelle Patterson looks like a breakout star, Matt Cassel was efficient if unexciting, and the defense just didn't allow the Rams to get anything done with their backup and backup's backup quarterbacks in action. Are the Vikings that much better this year under new coach Mike Zimmer, or are the Rams just that bad?

It wasn't vertical, but it was effective. Matt Cassel threw three passes deeper than 10 yards downfield, but was 16-of-22 for 152 yards and two touchdowns on short throws.

Kudos to the Vikings' pass protection, which provided Matt Cassel with a perfect pocket from which to deliver on-time throws. Of course, nobody is talking about that. All the buzz centers on receiver Cordarrelle Patterson, who rushed for over 100 yards on Sunday. He is exciting, no doubt, but let's tap the brakes -- he also caught just three passes for 26 yards. That's kind of an important part of a wideout's game.

But I don't want to belittle the understandable excitement in Minnesota. The Vikings went 4-0 in the preseason and simply hammered the Rams (at their place, to boot).

The defense was really good against the Rams, but was that because the Rams aren't any good? We'll know more against New England this week.

The defense limited the Rams to two field goals, Cordarrelle Patterson is one of the league's most dangerous weapons and the great Rams D-line really didn't get to Matt Cassel. The Vikings could be dangerous.

That was impressive at St. Louis. Certainly sets up a very interesting Week 2 game against New England. Let's re-evaluate these guys after that.

You read that correctly: Their leading rusher was Patterson, not Peterson. (Vikes held Rams' top rusher to 43 yards, too.)

Mike Zimmer's young and talented defense is coming together faster than expected. On the offensive side of the ball, WR Cordarelle Patterson proved why he's a dynamic weapon with the potential to score on any touch in Norv Turner's offense.

And that's your Power Rankings Roundup for this week. Thoughts, ladies and gentlemen?