It's time for this week's look at how the Minnesota Vikings are faring in the eyes of experts across the National Football League, as we check out the Power Rankings Roundup for Week 3.

Here's what the graph looks like for this week, with drops pretty much everywhere (as you'd expect). As always, feel free to click to embiggen. 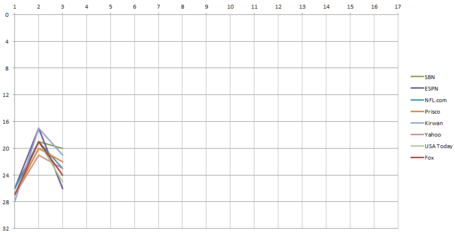 And the relevant data for this week.

So, what are they saying about our favorite football team?

No Vikings-specific commentary at this time. If some gets added later, we will edit it in.

Why were fans calling for Teddy Bridgewater? Matt Cassel is the first quarterback since 2006 to start Weeks 1 and 2 without completing multiple attempts deeper than 10 yards downfield.

Tough "home" opener for the Vikes against the Patriots. Defenders have a better shot of putting their hands on a receiver without a flag being thrown than Matt Cassel does of evading pressure right now. Holy cow. #pocketawareness

Adrian Peterson is supposed to play this week, but where is his focus? The cries for Teddy Bridgewater at QB are just around the corner.

It seemed as if the Adrian Peterson news cast a pall over the team, but in reality the Vikings simply couldn't get things done in the trenches on either side of the ball. We saw the bad Matt Cassel again as he went 3-for-11 for 22 yards and three interceptions when he was pressured.

You can't have Teddy Bridgewater make his first start at New Orleans. But after that? I mean, we all know what Matt Cassel is.

So, two major takeaways from this week's Power Rankings.

Tune in next week when we learn even more things that we probably already knew.