Well, now Vikings fans have officially been through it all.

No seriously, this HAS to be it. There can't be anymore after the Adrian Peterson saga. Suddenly losing the team's best player and face of the franchise indefinitely by having the team deactivate him two separate times in a highly publicized case that divided the fan base and sparked a national debate? That has to be the final space of some twisted game of Scandal Blackout Bingo that the Vikings have been playing for the past several years.

This past week has had many of us questioning our fandom of the Minnesota Vikings and the NFL in general. We have now been through it all, yet we're still here. In the past 15 years alone, here's a sample of what Vikings fans have endured:

We made it through Dimitrius Underwood.

We made it through Randy Moss pushing a traffic cop with his car, which had weed in it.

We made it through Kevin Williams being arrested for both DUI and domestic violence, which threatened to derail is promising career before it started.

We made it through Red McCombs.

We made it through the Whizzinator.

We made it through "Straight Cash, Homey".

We made it through the Love Boat, which was the subject of roughly 4 billion jokes by fans of opposing teams.

We made it through Koren Robinson drunkenly treating Minnesota highways like a game of Grand Theft Auto after convincing us he had cleaned up his act.

We made it through Dwight Smith getting nasty in a public stairwell in downtown Minneapolis.

We made it through years and years of Bryant McKinnie being a big, dumb idiot in a variety of ways before he went on to perfect his craft in Baltimore and Miami.

We made it through the ridiculousness of picking up Brett Favre from the airport and watching his arrival unfold like the O.J. Simpson car chase.

We made it through Favre's dong.

We made it through being the #1 target of BountyGate.

We made it through Percy Harvin chucking a weight at Brad Childress only four days after Moss was cut. And then a bunch of seasons of his mysterious and unpredictable headaches along with other maladies.

We made it through Rhett Bomar getting a DUI in Mankato while he was trying to make the roster.

We made it through the ridiculously drawn out Star Caps case with the Williams Wall.

We made it through backup RB Caleb King nearly beating a man to death because he told King he looks like Eddie Murphy. (No, really, that happened.)

We made it through Jerome Felton's DUI arrest in a McDonald's drive-thru.

We made it through Jerome Simpson getting suspended for a DUI arrest...after he had already been suspended for getting weed delivered to his house.

We made it through A.J. Jefferson's domestic violence arrest and subsequent dismissal from the team before the exemption list was all the rage in the NFL.

We made it through Kluwe.

We made it through the dozen other arrests I either forgot about or didn't feel like listing.

We made it through the news of Jerome Simpson's latest citation for weed, booze, and driving violations. Which of course was TODAY.

AND THAT'S JUST THE OFF THE FIELD STUFF! SINCE 2000! WE HAVEN'T EVEN TOUCHED ON ALL THE HEARTBREAK THIS TEAM HAS CAUSED US DURING ACTUAL FOOTBALL GAMES OVER THE YEARS!

Because that's what we do. We persevere. Through all the bullshit, disappointment, and turmoil, we come back for more, just dreaming for that one moment of unparalleled glory. We have a new no-nonsense coach and promising rookie quarterback that might just be able to take us there one day. So we get back up and cheer our team on.

(And also probably masochists to some degree, but that's beside the point.)

I hope you'll forgive me that this week's preview is a little late and a little light. We've been a little...busy...here at Daily Norseman over the past several days. But I still want to give you a quick overview of what I think might happen on Sunday in the Superdome.

First of all, let's take a look back at why Matt Cassel was so awful last week. It didn't help that he was playing against the guy who was his Head Coach the first four years of his career. Belichick was able to hide Cassel's flaws during the 2008 season, but he sure as hell remembered what those flaws were. Mostly that Cassel can get rattled when you bring consistent pressure and he can't throw a consistent deep ball worth a lick.

The pressure part was made pretty easy for the Patriots thanks to the offensive line, especially the left side. While Brandon Fusco and Phil Loadholt were serviceable last week, Matt Kalil and Charlie Johnson spent much of their afternoon doing things like this:

When Cassel gets pressured like this, he gets jumpy. Watch this 3rd and short play in the second quarter where Cassel starts scrambling before any pass rusher is even close to him. Which causes him to miss a wide open Kyle Rudolph coming across the field, which causes him to dump it short to Matt Asiata, which causes a Vikings punt on a promising drive while the game was still somewhat in the balance.

I'd go on and show you the interceptions where Cassel threw the football like a paper airplane, but I think you guys already knew that deep balls aren't exactly his strong point. It also goes without saying that if the Vikings are -4 in the turnover department again they don't stand a chance in New Orleans.

For argument's sake let's say the Vikings take care of the ball and the offensive line holds their own. There are plenty of yards to be had against the Saints defense, especially in the air. The Saints have the worst-rated pass coverage rating from Pro Football Focus through two weeks, and after watching some film on them I want you to remember one name: Patrick Robinson.

Much like the Vikings' own defensive back named Robinson that wears the number 21 struggled last year, Patrick Robinson has become the object of scorn for many Saints fans this season. Just take a look at how badly he was beaten by Miles Austin for a touchdown last week:

Norv Turner and Matt Cassel should have the following sentence in big letters in this week's game plan: IF YOU HAVE PATRICK ROBINSON IN SINGLE COVERAGE, FOR GOD'S SAKE THROW IT TO THAT RECEIVER. Of course that may not happen very often if New Orleans doesn't respect the running of Asiata and Jerick McKinnon; they'll be happy to drop a bunch back in coverage and dare Cassel to find his weapons in the passing attack.

(Wow. That was soooo weird to write. The Vikings rushing attack might not scare one of the worst defenses in the league? What a difference a week makes.)

Of course the New Orleans defense isn't what concerns you anyway. Once again the Saints are loaded with offensive weapons, even if they're also missing their starting running back. Luckily for New Orleans the drop from Peterson to Asiata/McKinnon is much more precipitous than the drop from Mark Ingram to Khiry Robinson and Pierre Thomas. The blow is softened even more when you throw in the weapons Drew Brees has at his disposal in the passing game: mainstays like Marques Colston and Robert Meachem, young bucks like Kenny Stills and Brandin Cooks, and a fella you may have heard of by the name of Jimmy Graham.

Our old pal Arif wrote an incredibly thorough piece on how the Vikings could slow down Graham, but I'm not going to hold my breath on that one. Unless the Vikings can take care of the ball, dominate possession, and make some key stops when Brees does have the ball, I could see it getting pretty ugly on Sunday. New Orleans is desperate for a win and the Superdome crowd will be in full throat for their home opener. No matter what the Vikings players are saying, the AP situation still has to be weighing heavily on them. I'm hoping for the team to galvanize around the situation and put forth an amazing effort, but it's much easier to see the wheels falling off yet again.

But hey, at least we're already VERY well conditioned for disappointment at this point. When next week's game rolls around, we can say we made it through another painful Vikings loss in New Orleans.

(Or perhaps we can even say we watched Teddy Bridgewater's first NFL snaps? Nahhhh.)

And now for the rest of my Week 3 NFL picks (home teams in ALL CAPS):

I'm heading to the game in Tampa in late October after a family vacation in Orlando the week before. My old roommate (huge Bucs fan) will be there along with a certain pantsless Florida resident that writes for this blog. We haven't bought tickets yet. Why not? Because at the rate the seasons are going in Tampa and Minnesota, tickets will practically be free by the time the Vikings come to town.

OK, so the Bills might be a lot better than everyone thought. And they're riding high after knowing that their team will remain in Buffalo. But I'm still not picking them. Why? BECAUSE THEY GOT RID OF THEIR CHEERLEADERS! How am I supposed to post my GPotW if the Buffalo Jills don't even exist?!

One more week like this and Mike Zimmer is going to stand outside Marvin Lewis' window with a jukebox held over his head.

Sure, Cleveland looks legitimately frisky this season. And Cleveland won this game last year. But the Ravens won the eleven games before that one, so I'll stick with Baltimore until a new pattern emerges.

I was worried about this pick because I legitimately think Austin Davis could outplay Tony Romo. Good thing Shaun Hill is starting for St. Louis instead.

Someone is about to get their first victory of a non-New York team!

Loser of this one should be relegated. I bet Shad Khan could pull it off too--he owns a soccer team.

My Survivor Pool pick of the week, now 2-0 after the Packers made me sweat it out for the second consecutive Sunday. Just keep working on those 2015 mock drafts, Oakland fans. We'll notify you if anything of note happens on the field.

Houston might be enjoying the easiest three-game opening to a season of all time. Who's their Week 4 opponent, the 2008 Lions?

I'd feel much more confident about this pick if Washington's backup quarterback wasn't starting.

This one's a toss-up, but I'll take San Fran since the status of Carson Palmer is so uncertain. And since I don't really want to delve into the domestic violence charges each team is dealing with, here's your Gratuitious Picture of the Week! 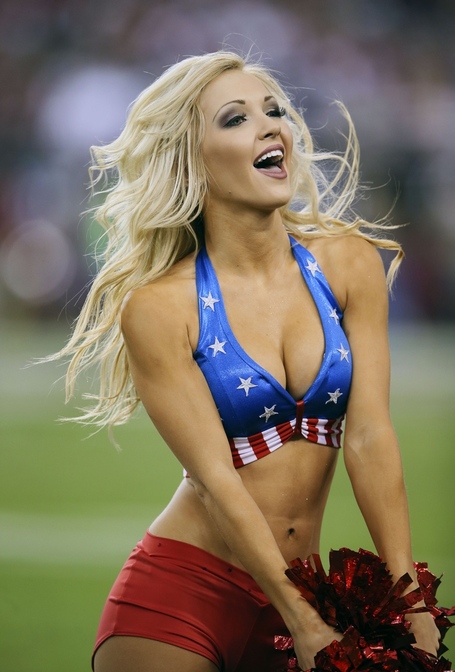 "I'd let Kaepernick swear all day / It sure is better than a hit from Ray!" (image via gamedayr.com)

Bold prediction: the final score of this one may be closer than the final score of last year's Super Bowl. (That's why you read picks articles like mine--to watch me go barely over .500 and make vanilla projections that literally anyone else could make.)

Three Kansas City players suffered season-ending injuries while you were reading this sentence.

If you combined New York's first half with Chicago's second half last week, you'd have one hell of a game. Combine the other sixty minutes these they played last week? Yeesh. I'll stick with how the Bears finished in a battle of two teams that have been literally half-assing it so far this year.