Hey, remember when the Minnesota Vikings were trending upwards in the Power Rankings around the internet and everything was coming up purple?

Man, that was awesome, huh?

Well, as you'd probably expect after a second straight loss, the trend is downward. It's just a matter of degree at this point. Here's the graphic representation of things to this point, which you may click to embiggen. 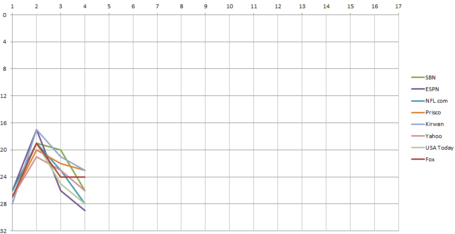 And a more numerical representation of things:

So what sort of commentary accompanies this week's rankings? Let's have a look.

No team-specific commentary at this time. If some is added later, we will throw it in.

So Teddy Bridgewater -- like the Raiders' Derek Carr before him and the Jags' Blake Bortles this week -- will be making the first NFL start of his career. The youngster didn't fare too badly in his first official regular-season action (12 of 20 for 150 yards) while filling in for injured Vikings quarterback Matt Cassel on Sunday, and he certainly looked like a kid in a candy store fraternizing with Drew Brees after the loss to the Saints. Bridgewater was 8 years old when Brees made his NFL debut.

AP and Matt Cassel are gone, so this has become a rebuilding project. Without Adrian Peterson the past two games, the Vikings have scored 16 points. Welcome to the Teddy Bridgewater Era.

It's Teddy Bridgewater time for the Vikings. That's a good thing. It's the right time, even if it was an injury that made it happen.

The offense continued to struggle without Adrian Peterson until Matt Cassel went down to injury and Teddy Bridgewater entered the game. Bridgewater showed poise under heavy pressure and extended several plays with his legs. The defense made adjustments and slowed down the Saints offense. Rookie Anthony Barr picked up a sack, two additional pressures and a batted pass. With Bridgewater at the helm, there may be hope going forward.

That performance at New Orleans actually wasn't too bad, considering all the circumstances. Still, a rookie quarterback with Matt Asiata heading up the running game won't inspire anyone.

Their master plan definitely did not entail Teddy Bridgewater handing the ball off to Matt Asiata.

With Matt Cassel's injury, Teddy Bridgewater is the Vikings' starter for Week 4. He'll likely be going forward without Kyle Rudolph as well as Adrian Peterson.

A lot of outlooks on the Teddy Bridgewater era kicking off this weekend. Hopefully it will result in an uptick in these rankings next week.