It's time, once again, for our look at the NFL Power Rankings around the internet to see what the "experts" think of the Minnesota Vikings. As you'd expect after a victory like the one Minnesota had on Sunday, things are trending upward a bit. How much? Well, that depends on who you ask.

Here is the data for this week's set of rankings:

And now, here's what it looks like in graphical form. As always, you may click to embiggen. 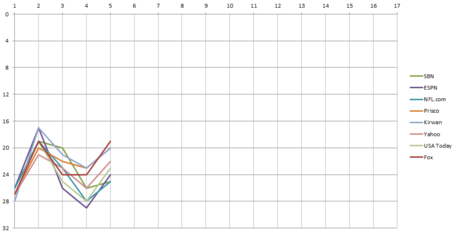 So, what are people saying? Here's the roundup.

The Teddy Bridgewater era got off to a fast start against Atlanta. Now comes a tough turnaround against the Packers.

Teddy Bridgewater is a legitimate reason to get excited about the future but he will have his growing pains. The Vikings are running without Adrian Peterson, which is impressive, but the defense needs to get better.

Imagine how good they'll be when they remember it's legal to call plays specifically to get Cordarrelle Patterson the ball.

With it being a short week, and Teddy Bridgewater ailing, we are putting the Vikes here for now -- with great upside potential. (Especially since the early signs on Bridgewater's ankle injury appear encouraging.) Thought Teddy would outperform Blake Bortles in their starting debuts, despite the buzz surrounding the latter in the preseason, and it sure worked out that way Sunday. The kid was beyond impressive, eclipsing 300 yards while completing over 60 percent of his passes -- and don't forget the touchdown run. Most importantly, the Vikings didn't turn it over.

Adrian Who? RBs Matt Asiata and Jerick McKinnon provided 252 of the Vikes' 558 yards (their most in 10 years) on Sunday.

The Teddy Bridgewater era got off to an incredible start as he made several impressive downfield throws, utilized the play-action pass and even showed off his mobility on a touchdown run. Bridgewater rolled up on his ankle late, but he expects to be fine for this Thursday's game against the Packers. Lost in the Bridgewater madness was another shutdown performance in the second half by the defense as they held the Falcons scoreless in the fourth quarter.

So, Teddy Bridgewater is awesome and Cordarrelle Patterson could stand to get the ball a little more frequently.

Hopefully we'll continue seeing an upward trend when we get to next week's rankings as well.